After All This Time, WTF!

This week's blog is at best tangentially related to HM. A glimpse behind the curtain, & perhaps amusing for those who know the studio's work (avoision) habits... 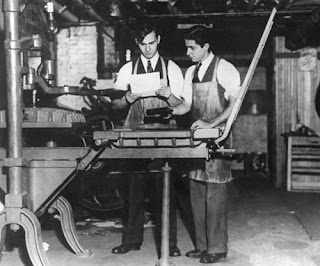 For an edition of 50 copies, a single run (i.e. one side of a sheet) on a handpress takes me at least 10 hours, often 12. It's nothing like the exciting scene shown above; it gets really boring. There's nothing you can do to make it happen faster. (This is the main reason our editions are getting smaller: printing is boring, and a handpress is taxing on the muscles.) Distractions can lead to carelessness, so whatever accompaniment you allow cannot demand your ongoing full attention. That explains a lot of the music played here: glacial wall-of-sound, sustained rhythms. No singing. Luckily there's a lot of really interesting contemporary chamber-type music that does the trick. 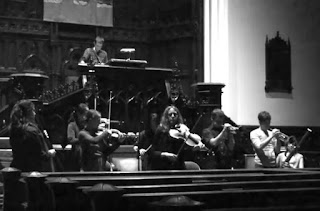 While printing's solitary nature usually is part of its appeal, things can get a little lonely or dull during a long run, and the sound of people having an interesting conversation helps keep momentum. Back when all we had was radio, the pickings were awfully thin (NPR doesn't reach quite this far). Podcasts have helped, if only in freeing people from the tyranny of prescribed time limits, but like most things on the Web, there's a lot of content but little substance. One of the few that has been a staple at HM for several years now is Marc Maron's WTF. (There's a HM connection here; bear with.)

Maron is one of the best, most engaging interviewers working right now. I started listening around episode 150, when he was still working through his Rolodex of comedians. The show has trended away from its initial premise over the past year, with more musicians and actors being booked (and one President), usually ones who have a PR angle. It's become more mainstream and less unpredictable, but he still manages to have engaging conversations. Every book published by HM since 2011 has been produced with significant WTF support.

Today, while looking through project files for something, I found a folded sheet from a local weekly. Wondering why I'd kept it, I opened it out and scanned the articles, finding a short mention of HM's first publication with Barbara Hodgson, in 2004. Interestingly, on the other side, I saw a profile of Maron for his upcoming debut in Vancouver. I don't recall ever noticing it before, and his podcast was my first exposure to him anyway. 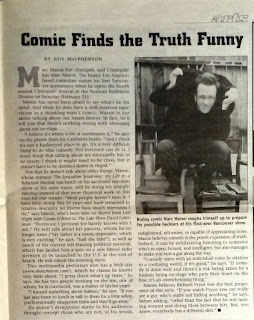 How's that for provocative headline writing? Sadly this weekly is nothing like The Stranger.

Just a weird story of coincidence. On his podcast Maron has discussed several times a long-running hassle he had with Canadian Immigration: he'd been blacklisted after being "caught" coming up for a gig without the proper work permits in place. I wonder if this was the gig? Boomer lives.