Received 250 full & 200 quarter sheets of Golden Hind mouldmade paper, courtesy of Takao Tanabe. It's a beautiful text-weight laid sheet that prints beautifully. Perhaps the best surprise was that the paper retained its original wrapping, with the maker's label, thereby answering my long-standing question of who made Golden Hind.

I know of Golden Hind because it's what Robert Reid had Kuthan's Menagerie of Interesting Zoo Animals printed on in 1960. As Bob explained in the introduction for Kuthan's Menagerie Completed, he felt the paper was too translucent for George Kuthan's bold & colorful linocuts, so he printed on one side of the sheet only, and bound the book along the open edge. When Tak called to tell me about the stash of Golden Hind he'd found in his studio, it got me wondering what mill it came from. Tak got into job printing in the '50s, initially being mentored by Bob. Tak's artistic talents quickly showed through in a series of typographically creative and playful broadsides and poetry chapbooks he designed and printed. In the early '60s he got a Canada Council grant to study in Japan, and his vocation as a printer was displaced by a career as one of Canada's most important painters.

Tak guessed that the Golden Hind he dropped off last week was purchased mid- to late-1950s, when he was printing. It was being distributed by a paper supplier in Toronto. I asked Bob Reid about how the paper came to his attention:

"Somebody in Toronto alerted me to the fact that a paper house there had this gorgeous mould-made British paper that was mouldering in their warehouse because nobody in Toronto wanted to use it. So we bought all they had. They must have kept stocking it for us, if Tak was buying more of it years later. You are so lucky to be able to get some of it now." 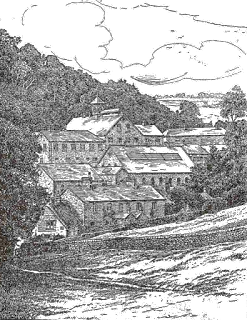 A search for "Golden Hind paper" yields surprisingly few results. The most useful is Papermaking at Tuckenhay Mill, a reasonably full account of the mill's history, which ended in 1970. I can't find any specific mentions of Golden Hind on the site. 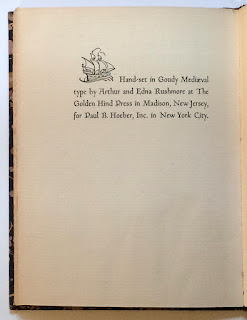 I initially wondered if the paper had any connection to Arthur Rushmore's press, but apparently not. An Abe keyword search for the paper turns up just one other book printed on the paper: Philip Levine's On The Edge, printed by Kim Merker in 1963. Interesting that it's around the same time that Bob and Tak were using it. Perhaps the paper was a new sheet introduced by the mill in the '50s to complement (or as an alternative to) its handmade products. Will Rueter printed 10 special copies of Ten Songs (The Aliquando Press, 1987) on Golden Hind; he may have gotten it from Gus Rueter, whose private press was active in the late '50s and early '60s. 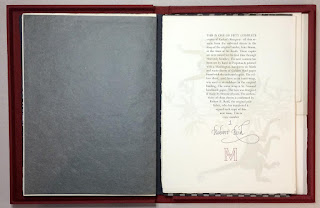 I've printed on Golden Hind twice so far. The first time was Kuthan's Menagerie Completed, which included a two-page intro by Bob printed on blank sheets that had been stored with the unbound copies we were releasing. Some printed sheets had been balled up and used as packing in the box; these we used for the colophon. They were dampened for printing, and dried in the usual manner, under pressure, which helped smooth out the wrinkles. 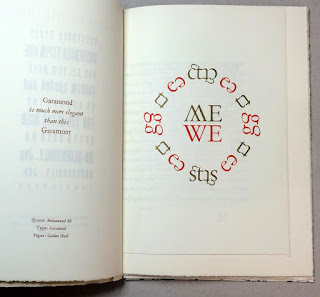 The second time I printed on Golden Hind was for Metal Type. For some reason, one page of text (set in Perpetua) from Kuthan's Menagerie had been overprinted; I guess they didn't like something about it. So I had all these copies of the same page of text on one side and blank on the other (They'd been stuffed in with the unbound copies I had in 2003). Metal Type combined a number of different papers, so it provided an opportunity to use up the Menagerie waste sheets: I used the blank side to print a Muhammad Ali quote I've always liked. On the printed side I displayed my own 18-pt Perpetua, intermingled with Bob's original. 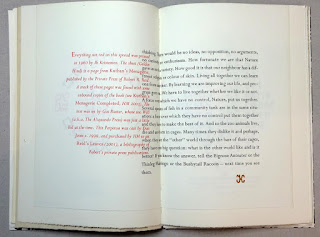 The paper prints beautifully. It's relatively soft, but not too much. Like most papers, it prints better damp, but it doesn't require a lot of damping.

So, huge thanks to Tak for thinking of HM. I've promised him a copy of whatever I print on the paper. The problem is, when you get a stash like this, once it's used you'll never get more so you never use it! We'll see...