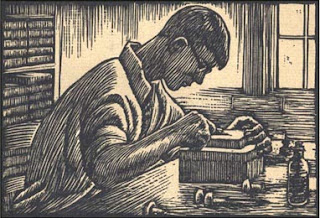 Received an announcement for a book to be published by the Tampa Book Arts Studio: an unpublished short story by artist J. J. Lankes. "The Rich Mouse [is an] allegorical fable emphasizing the snares of materialism versus the redeeming strength of love and forgiveness, written in 1950, but set aside and never published."

The studio is running a Kickstarter campaign for the project, with details of the publication here. It will be set in Goudy's Village type (see previous post regarding Goudy types...) and printed on the studio's Washington press, which happens to have previously belonged to Lankes. It's also oblong in format, but I guess they have their reasons. 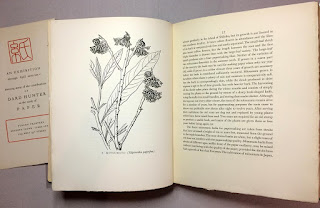 Poking around, I found this 1931 profile of Lankes written by Sherwood Anderson. The Tampa project caught my eye primarily because I'd recently acquired a book that included several Lankes engravings: Dard Hunter's Papermaking in Japan, China & Korea (1935). At least, the illustrations were attributed to him in the catalogue's bibliographic description, but looking through the book I can find no mention of the artist. Lankes and Hunter certainly knew each other and were in contact during the period of the book's publication, so it's possible. 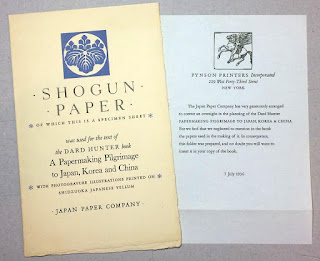 (One of my favorite parts of the book is the addendum inserted loose, regarding the paper upon which the text was printed. Imagine overlooking that detail in a book about paper!)

Papermaking in Japan... is one of two Hunter limited editions that were published by Pynson Printers. As momentous as Hunter's Mountain House Press book were, in terms of all the work being done under his own roof, the quality of production is better in the Pynson book. The type he designed, and his sun cut & cast, can get difficult to read, the presswork wasn't always great, and he sometimes used ruinous adhesives to mount paper samples. Nonetheless, I covet my copies of Papermaking by Hand in America and The Literature of Papermaking as much for their shortcoming as for their achievements. If Hunter could get a few things wrong, there's hope for HM yet. 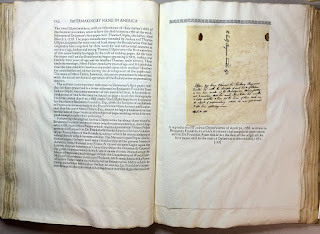 Redemption stories aren't really my thing - I naturally gravitate more to things that go in the other direction - but the Tampa Book Arts Studio is doing valuable outreach work. Consider showing your support by ordering a copy of the Lankes book.