John Henry Nash, What Were You Thinking? 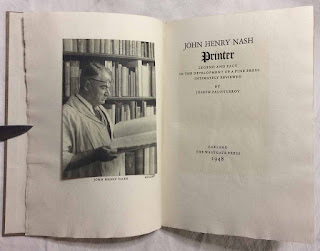 Dipping into the oeuvre of San Francisco printer John Henry Nash this month. I’ve long been a fan of his work, although not necessarily all of his books. This post was sparked by a recent leaf book acquisition, purchased sight unseen, and in some aspects it is less than aspirational. 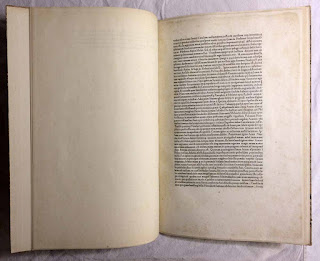 The book is Nicolas Jenson, Printer of Venice, published in 1926, with a leaf from Jenson’s 1478 edition of Plutarch’s Vitae Parallelae Illustrium Virorum (volume 2). Jenson, Nash, leaf book: these three things combined in one book make it aces for me, but turns out it isn’t one of Nash’s better productions. The first thing I noticed when the book - which is folio sized, to accommodate the Jenson leaf - arrived was the paper. Where many of his books featured European hand- or mouldmade paper, this appears to be a machine-made (it is not mentioned in the colophon, and Nell O’Day’s Catalogue of Books Printed by JHN lists it simply as “Strathmore”). 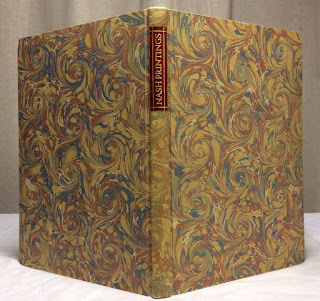 The Jenson leaf has a little foxing, and Nash’s paper is buff; the Strathmore may have been chosen because its cream hue approximates the Jenson leaf. But in 2017 it simply looks like cheap paper that has aged quickly and badly. Attention to this unlovely paper is heightened by it apparently having been used with the grain going the wrong way: pages buckle along the gutter when turned. The slim volume’s opening isn’t helped by the vellum spine - the thing just doesn’t really want to be opened. 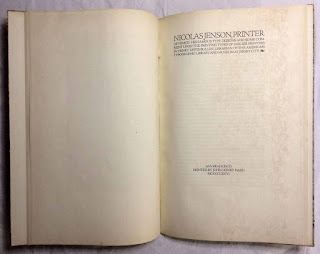 The paper is the primary sticking point. Nash knew paper & most of his books were printed on lovely paper, often a laid Van Gelder mouldmade with his watermark. Why, then, did he choose such a charmless paper for the Jenson project? Let’s inquire by taking a quick tour through some of his work… 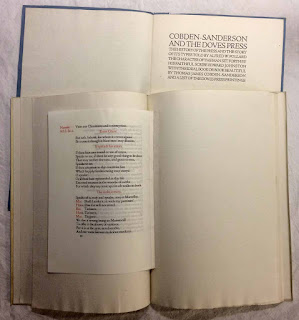 Starting with the best example at hand, Cobden-Sanderson and the Doves Press (1929) is another leaf book, one for which the materials and production do justice to the content. The paper for this book is the Van Gelder. The edition is 339 copies, all with an original leaf tipped in on tapes (allowing easy inspection of the verso; the too-common shortcut of gluing a leaf along one edge discourages turning it); 37 of the copies include a vellum leaf, and are bound in full vellum over boards (the rest of the edition in simple limp vellum). A beautiful production. 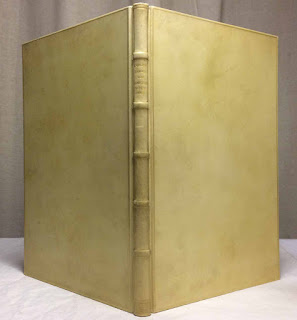 Nash employed the vellum over boards, with exposed tapes laced through the joint, on a number of his publications. One on my shelf is the folio-sized doorstop The Life and Personality of Phoebe Apperson Hearst, a hagiography of the mother of William Randall, who footed the bill for the 1,000 copies - all for private distribution - bound in vellum over boards (the binding was done in Germany). Nash was also commissioned to print a companion volume about Hearst’s old man, which is much more scarce than Phoebe’s volume. I found this copy in a second hand store, priced at $100 (which seems to be the going rate online). I cannot imagine how much the binding alone would cost now, assuming you could find someone who knew how to do it, but a lot more than a yard, so I bought the thing. Didn’t even pretend I might read it one day, I just admire the binding, paper and printing every now & then. 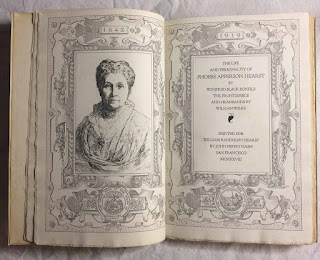 Back to paper: my claim that the paper used for the Jenson book is an aberration among Nash’s publications is bolstered by looking at some of his ephemera, all printed on the same beautiful papers he used for books (that’s what offcuts are for). I have two pieces that were printed on handmade H. Pannekoek paper, with a beautiful, big watermark. Apparently Pannekoek disappeared some time in the 19th century, so this must be stock Nash found in a warehouse somewhere. It’s a lovely sheet, a bit soft (possibly unsized). 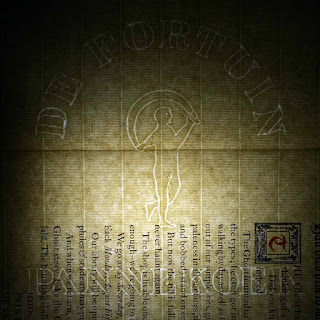 Nell O’Day’s catalogue was printed by Nash in 1937. It’s not a rare title, but the only copy I’ve ever seen in a shop is the one I bought (it’s in an elegant case of waxed marbled paper over boards, inscribed by Nash and O’Day on the front pastedown). Skimming through it, Pannekoek paper makes its first appearance in 1926, for The Rime of the Ancient Mariner. He seems to have had the Le Fortuin sheet (above) and another, “laid finish” sheet. 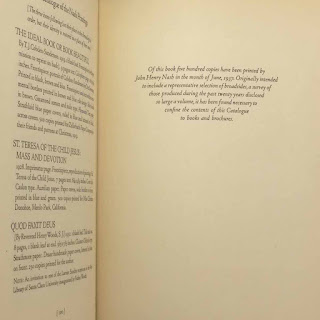 Pannekoek is used for a few more projects, up to 1928, and then no more - me must have used up his stash. This large pamphlet (The End of a Quest: An Appreciation), issued in 1928, may have been the last of what he had. 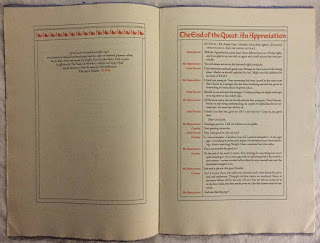 The thing that is particularly irksome is that Nash had the Pannekoek paper on hand when he published the Jenson book. It would have been a perfect match, but instead we get the loathsome Strathmore - a sheet with no mention I could find in the Catalogue before or after the Jenson project; that tells you how much Nash liked it Worse yet, he had been using Kelmscott paper for projects immediately before the Jenson! Imagine what might have been. 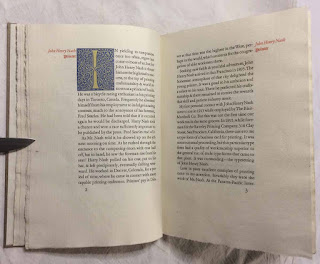 Joseph Fauntleroy’s reminiscence about working with and for Nash (JHN Printer, above) is beautifully produced in the printer’s style, on his watermarked Van Gelder paper, but may be of interest only to hardcore printing nerds. It includes an intriguing mention of Nash’s fondness for bicycle racing during his early apprentice years in Toronto, a fondness that apparently cost him his apprenticeship & sparked the travels that eventually took him to San Francisco. Fauntleroy also mentions several times the care and attention that went into choosing the right paper for specific projects, a point that underscores the uncharacteristic choice for the Jenson book’s. 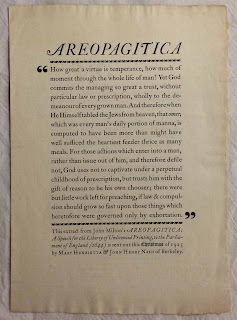 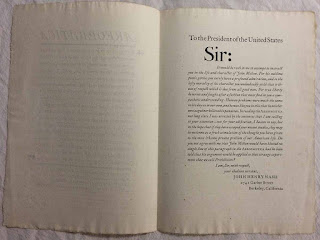 Having taken that brief tour, perhaps you can understand my puzzlement at, and disappointment with the paper he used in the Jenson book. None of the reference books I have at hand offers any insight to the decision. Regardless, I justified purchasing the book as a raw material for the second edition of the Francesco Griffo “biography” we’ll be printing one day (thought it might be next year, but now looks like 2019 earliest): I’m thinking of including letterpress facsimiles of pages from books mentioned in the biography, including one showing Jenson’s roman, so I need an original leaf to reproduce. Same with that Hypnerotomachia leaf I mentioned last month. 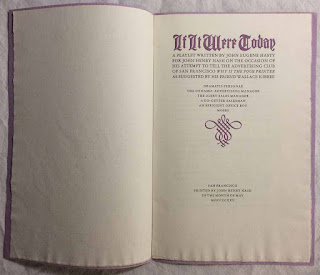 So that’s a lot of moaning about a book I just bought. Even if I’d seen it first, I probably would have bought it anyway, because of Nash and Jenson. At least it sparked me to pull out my Nash ephemera and play with it again. I think I’m going to offer up Mrs Hearst, in her stunning vellum clothing, The End of the Quest (large folio, printed on Le Fortuin), the Aeropagitica quote (single folded sheet, JHN Van Gelder, with unicorn), If It Were Today (folio pamphlet, JHN Van Gelder laid), and Americana Vetustissima (single folded sheet, JHN Van Gelder laid) as a collection, for $250. Send me a note if you want more details & etc. 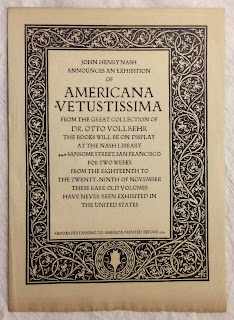 We have something special for the first post of 2018, with a number of printer friends contributing. Until then, happy happy, merry merry, be well. HM