Presents for the Printer (Pt 2)

I'm actually doing some printing this week, so we'll keep the post brief. Look what Frankie Griffo got me! 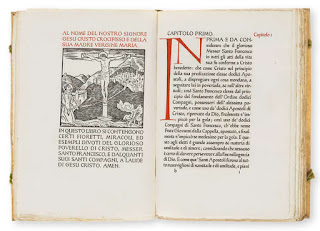 He's swell. There actually aren't many Ashendene books that tempt me, but this is one that does. I read it aloud in the studio, like Otto in “A Fish Called Wanda.” Cheers FG!

I intend to start making more use of the small Albion handpress, which requires getting some new gear, starting with a different tool for inking. The roller I use on the Washington is too large. Anything has to come from Takach, the only place to get a roller or brayer. I settled on an 8-inch 60-dur brayer. wuhoo. More on all that in the new year. I also got some (different) letterpress inks from Takach, which I'll be reporting on. 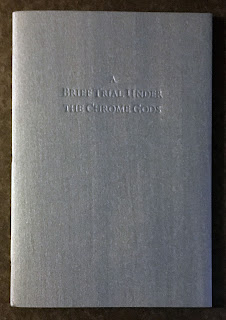 Six years ago, a Montreal musician who records under the name Phoenix York issued his debut recording, Godspeed Phuong. Unlike a lot of what I listen to, I couldn't compare it to anything else I knew of. Two years later he issued remixes from Godpseed, with a very few CD copies in a custom wood case. I liked his music and his sense of design very much, and reached out should ever he want to do something book-ish. 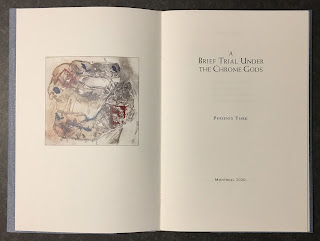 As he worked on his second album, he suggested printing a small collection of poetry as a companion, which sounded fine to me. I'd initially hoped to actually print it, but Griffo & life squeezed away that option, so we had it digitally printed in Victoria on Mohawk Superfine. The allowed us to have more color than I would have wanted to print, and to incorporate reproductions of two etchings Phoenix had made some years prior. I made the wrap (St Armand handmade, painted with two acrylic washes) and printed the title (A Brief Trial Under the Chrome Gods) in blind. The edition was just 25 numbered copies, to be issued with the new album (vinyl), and five HC copies for me. 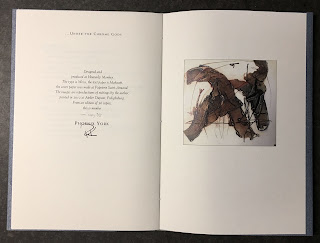 The album, Farther Things, had been scheduled for release in April, but... It finally came out this month, and apparently has been doing well (only two copies left as of this posting). I am once again entranced by his music; it picks up where Godspeed left of. 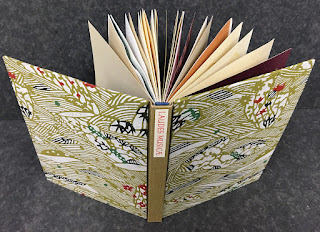 Turns out Will Rueter spent covid lock-down making an incredible new book! I saw a copy this weekend, it is stunning. He's really gone to town with the types, the papers, the designs, everything. An Aliquando high spot. This is kind of pre-publication so I can't say too much; more next month?

Merry merry to all, thanks to those whose kindnesses & interest have sustained. May all 2021 bubbles be in a glass.