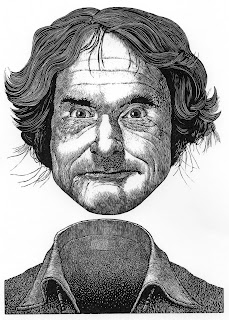 A brief note....a third installment in our Handpress Library will follow soon, probably Pepler's The Hand Press...been deep in printing Oddballs. A few of the recent sheets have resisted our efforts for uniformity and consistency (Timothy Leary was one; big surprise he rebelled against conformity), which leaves us too drained at the end of a day to write blogs. Last night we were attempting to unwind with a library book, Iain Banks' The State of the Art, a collection of short stories we'd first read maybe 20 years ago. But a few paragraphs into the first story we were stopped short by what seemed like an unusual amount of space after a period. Almost like two spaces. Really?! Gobsmacked with disbelief, we quickly scanned across that spread, and then flipping through the book confirmed yes, there were two spaces after each period throughout the first half, just like the students at Miss Havisham's School for Young Typists were taught a century ago. The disappearance of the additional space in the book's second half suggests perhaps the spaces were in the original text files used for setting the book, and the designer was too lazy to remove them (which shows a lack of care). And if these spaces are there intentionally (which shows a lack of care and taste), why only in the first half?

This vestigial belief in double-spacing was the topic of a half-hour discussion on a national radio show in Canada last spring, and it alarmingly generated a huge amount of pro and con debate. (It being Canada, both sides were given equal deference and the question remained unresolved. If you can't even get a thing like this right....) It's bad enough that there are still people who are prepared to defend this as good practise, but to see it in a book is incredible.

It was a second edition of The State of the Art we were reading, issued in 2004 by Night Shade Books. We've seen other books they've put out, and none have shown much sensitivity for design. The unfortunate aspect of this situation is that the first edition, from Mark V. Ziesing, was an attractive book (and, contrary to Night Shade's claim, Ziesing's was the first publication of this collection not only in North America, but also the world). However, as a bookseller who specializes in modern fiction, Ziesing can take comfort in knowing that, if only for typographic relief, this latest edition of The State of the Art will make his original that much more desirable.