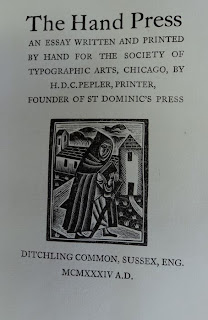 In 1934 Hilary Douglas Clarke Pepler published The Hand Press, based on his two decades of experience running St. Dominic's Press and working in collaboration with people such as Eric Gill and Hilaire Belloc. American printers were still in the thrall of their English counterparts at that time, but Pepler's book wouldn't have caused any technical envy among the Yanks: the greatest comfort we at HM take from The Hand Press is its unapologetic demonstration of the challenges posed by printing with a handpress. After a tough day in the studio, when printing a block of text with the crispness and consistency that we know is possible proves illusive, dipping into Pepler's book reminds us that others have suffered the same trials (and even issued their less-than-good results!).

The University of Notre-Dame's Hesburgh Libraries site offers this summary of Pepler's printing and publishing ambitions:

"Hilary Pepler lived in the Hammersmith neighborhood of London in the vicinity of the Kelmscott Press and early in life was an enthusiastic follower of the Arts and Crafts Movement. When he founded the St. Dominic's Press in 1916, however, he rejected the vision of the Book Beautiful embraced by William Morris over two decades earlier. Pepler printed the books he believed needed to be printed without undue concern setting especially high aesthetic standards. With his frequent collaborators the calligrapher and type designed Edward Johnston and the type designer and illustrator Eric Gill, he created books that were attractive while retaining their simplicity. Pepler printed books and the periodical The Game, but also a great range of ephemera, including posters, broadsides, calendars, and even labels for beer bottles. The commercial focus of the press allowed it to be successful well into the 1930s when many other private presses were failing. By 1940 it had gradually become less active while Pepler directed his energy elsewhere, and it was purchased and renamed the Ditchling Press." 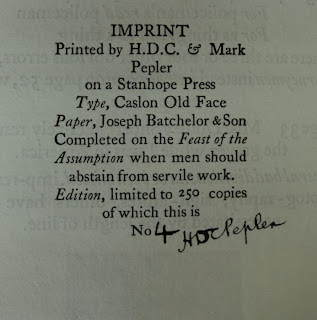 Rejected the vision of the book beautiful; that's about right. Not that The Hand Press is ugly, but it is a bit rough and ready. The text was set in what seems to be a particularly poor casting (the T and H sorts all seem much too heavy compared to the other letters, but the printing is inconsistent throughout the book, with little evidence of attempts at makeready, so it's hard to tell if this is the casting or work-ups; the image below sanitizes much of the vagaries on the page). It is printed on a laid paper that is too thick for the page size and bound with the chain lines running horizontally; despite what some people claim, even handmade paper, if laid, prefers folding with the chain lines. 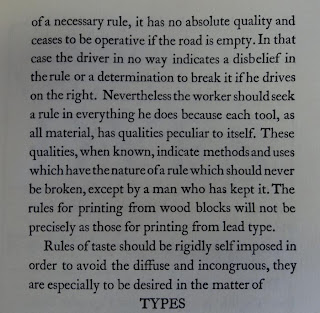 The text offers only passing technical information, focusing instead more on the esthetic and spiritual aspects of printing by hand (which is another reason for our fondness for the book). The stages of producing a book - from type selection through materials, to binding - are all covered in the text, often with anecdotes. There are a few facsimiles of title pages and early printing samples. It is not, however, a technical discourse, but one of taste and philosophy, and therefore of interest to both practising printers and those with an interest in the craft. 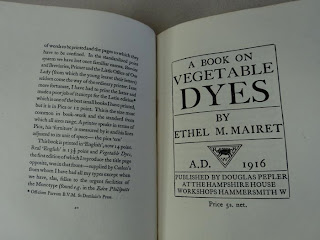 The book was apparently issued with a number of variants. Most copies seem to have been issued in a heavy brown wrap with a title band (see an image here); functional and not lovely. HM's copy is one of an unknown (to us) number - but probably very small - issued in quarter leather with patterned paper sides. This copy came from the excellent shop of Michael R. Thompson in Los Angeles, who can always be relied upon to provide cool books about printing. 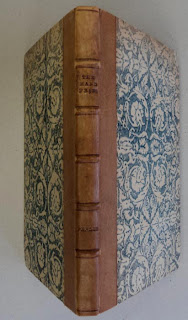 This post probably reads as if written while looking down from a higher point than Pepler occupied: it shouldn't and isn't. When reading The Hand Press (which starts with the sentence, "The difference between a Hand Press and a Power Press is one of control") we are listening to a colleague discuss in an affectionate tone the vagaries and labors of a process that might seem outdated, slow, and overly complicated when more modern options exist. But Pepler also writes about why no other process offers the same results or satisfaction, and like Lewis Allen's book, the fun is in seeing pages printed in exactly the manner discussed in the text.

Next installment: Harry Duncan's The Technology of Hand Printing. Another book that makes us feel better about our own shortcomings.

P.S. a second edition of Pepler's book was issued in 1952 by the Ditchling Press, also in an edition of 250 copies. Haven't seen a copy but online descriptions make it sound like a resetting, not a facsimile. No idea how it was printed, but we'd bet not with a handpress.