A few things we saw at the Wayzgoose printing fair in Vancouver.... 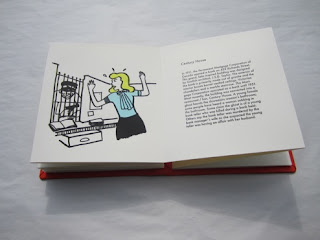 Marlene Yuen's A Haunting History of Vancouver. A collection of short ghost stories that Marlene culled from and about neighborhoods in Vancouver (the book, published this year, also commemorates the city's 125th anniversary). The text and images were silkscreened, with additional glow-in-the-dark colors printed on the images. Marlene had a haunted house set up on her table, with a dormer window that let you peek in and see one of her pages glowing. Very cool. Accordion fold in printed boards, edition of just eight copies, a steal at $300. See more about the book and Marlene's other work here. 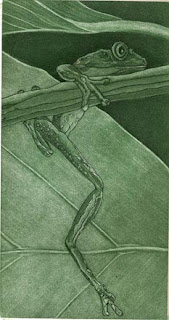 Peter Braune created an etching that he and Lesley Anderson editioned at their table (next to HM). Quite lovely. An addition to Peter's large collection of frog art. (We must ask him about the origins of his frog fascination.) Among the many imaginative cut-outs and pop-ups at Judy Ng's table, the HM devil (below, being shown by Peter how to ink the plate) found a card that opens to reveal a croaking frog, so she got it for Peter. 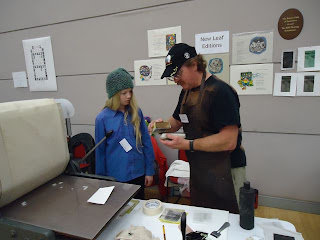 Emma Lehto's work stood out from the crowd (look under Typography, page 2). In concept and execution, it reminded us of the books Cara Barer creates for her photographs. While the Danielle Steel paperbacks that had been blasted with shotgun and rifle (the spent shells on display in a Lucite box) where dramatic (the paperbacks proved surprisingly resilient), her most sublime work on display with a completely deconstructed copy of a Lemony Snicket book: she cut out each individual work in the book (she must have used two copies, one for the recto words and one for the verso), and then assembled these on letter-sized sheets of paper in alphabetical order, i.e. all of the word "after" glued down in neat rows, then "and," then... Thus, the entire story was there to flip through. Polly Elsted, daughter of Jan & Crispin (a.k.a. Barbarian Press) was there with a prospectus for a new book from her Horse Whisper Press, featuring wood engravings by former BP collaborator Peter Lazarov. Balancing production with her undergrad in English, she hopes to have the book completed in early 2012... Greenboathouse Press was there with copies of the latest books on hand, including poet Robert Kroetsch's last work... Reg Lissel was making paste papers, and a mess... Phyllis Greenwood was making marbled papers, and a bit of a mess but not as much as Reg... Finally met Marcus Fahrner. He had a small book on hand called Hell Box - The Book, which, if we got the story straight, is a sort-of reduced reprint version of an extensively illustrated text detailing the development of printing technologies. That's probably not quite right. It looked intriguing, but the Fahrner & Farhner Web site is somewhat inscrutable, so we'll have to track Marcus down again in person... The Bowler Press continues its descent into the depths of Jane Austen, a voyage that is heading toward a three-volume edition (with text set by hand) of Pride and Prejudice... Lucie Lambert has a new book, but every time we went by her table there were people clustered around, so we didn't get a chance to see it or talk to her... Andrea Taylor had just completed her second suite of prints in the Artists' Portrait series. HM assisted with production of the first suite, in 2009, but our schedules didn't match up for this one, so Andrea set and printed the text pages herself. More beautiful intaglio portraits of (mostly) 20th century artists. Lucien, shown below, is from the first series. 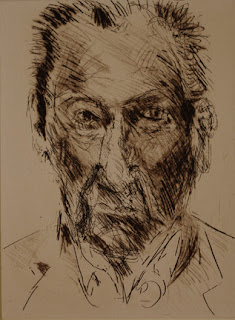 There was more to see, but attending to our own tables prevented us from getting around to everyone. Perhaps in future years we can think of a way to introduce a social aspect to the event, to allow us to mix and mingle more. For whatever reason, Vancouver seems to have book arts silos, as opposed to a book arts community.