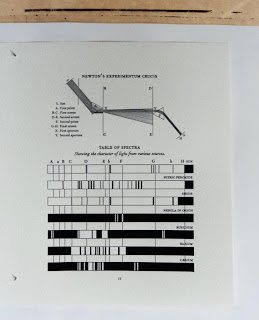 Spent the last bunch of weeks printing the third volume in Barbara Hodgson & Claudia Cohen's color series. (Apologies for the inconsistent use of the superfluous Oxford u in the title word on this blog and the HM site. We're Webster all the way, but Barbara is Canadian, & Canadians like to straddle Oxford and Webster. Claudia doesn't care either way.) Occupied By Colour is the first volume in the series to be printed at HM on the handpress; the first two were printed by David Clifford at Black Stone Press with a Heidelberg.

Like the previous two volumes in the series, the book is designed and set (in Fournier) by Barbara, and printed from polymer plates. Numerous illustrations are incorporated throughout, and once printed essentially serve as keylines for the subsequent coloring and embellishment Barbara does by hand for each page. The second volume in the series, After Image, required about three months of handwork after printing (and before binding; that was another few months of work); Occupied By Colour is expected to take at least the same amount of time to complete. 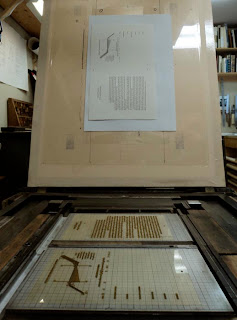 We're working off two sheets a week. Most are single black runs, but a few have illustrations with large black areas, so those are broken into two runs. Last weekend we printed a page that included a spectral representation of light. The text was printed first, then (same day) we lathered the ink onto the slab & printed the black bands.  Printing on dampened paper allows one to use much less ink than printing dry, and so when amping up for large black areas it can be alarming how much more ink than usual is required. 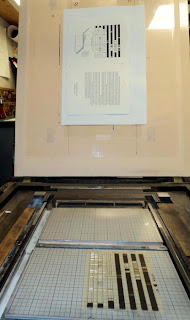 Semi-related, the CBC Radio show Ideas is currently running a three-part documentary on color. (Being the CBC, they'd probably want the u.) It's available by podcast from the show's site.