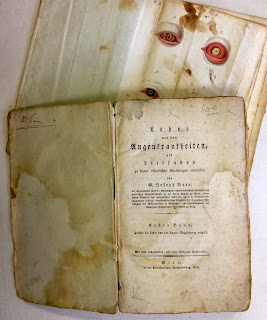 As previously posted, we sometimes find books that simply cannot be left where they are, (usually in or near discard pile). The potential to use blank sections (margins) of sheets from broken books, especially ones printed on paper made before 1800, is becoming a particular interest at HM. Not really altered books, but new ones designed so that the type can occupy the blank parts of an already printed sheet. So whenever we encounter a broken book with lovely paper, especially if it's 4to or larger in size, with "generous margins," we take it home. 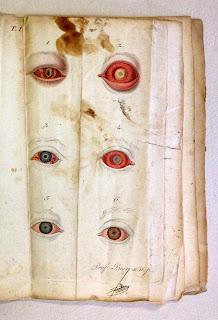 Looking through the collection of orphans & amputees recently, we re-encountered a German book printed in a fraktur type (with some latin phrases in roman) in Vienna in 1813, on paper that feels supple enough to sleep on. It came from a mouldy box of discards. Besides the paper, what really caught our attention was the section of hand-colored plates at the back (it had come loose in the box, and we were lucky to find it). The engravings were signed in the plate, but also appeared to be initialed by the artist.

Reading fraktur is hard enough even when you know the language, so it wasn't until the book re-emerged this week that we bothered to find out what it is:

Lehre von den Augenkrankheiten, als Leitfaden zu seinen öffentlichen Vorlesungen entworfen, by Dr. Georg Beer. The title roughly translates as "Study of the Diseases of the eye, as a Guide to His Public Lectures." 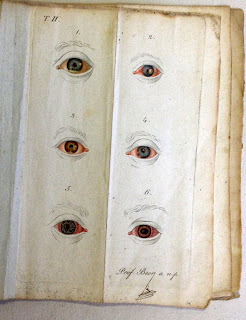 The book isn't rare - there are numerous copies currently on offer - but it does seem to have some significance in the history of medical publishing, not least because of the colored plates. Bookseller Jeff Weber currently has a set (there are two volumes) listed; his description includes the following details:

"Beer is remembered for his textbook; the doctrines in it dominated practice for many years. He described the symptoms of glaucoma and noted the luminosity of the fundus in aniridia. He also presented for the first time the general principles of treating post-traumatic inflammations, including penetrating and perforating injuries as well as injuries to the orbit. He describes the first use of the loupe for the examination of the living eye. The plates in this work were both hand-coloured and signed by Beer. He was a distinguished iridectomist. Many of his pupils became famous ophthalmic surgeons. Beer opened the first known eye hospital, in 1786, in Vienna. He was the first Jew to graduate in Austria. English translation, Glasgow, 1821." Garrison and Morton. 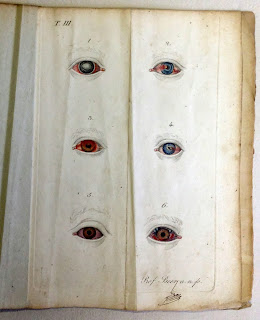 Georg Joseph Beer is considered the founder of the Vienna school and was "an excellent surgeon and a capable artist who illustrated his own books. He was one of the best known teachers of ophthalmology of all times and trained a generation of ophthalmologists who carried his teachings to their own lands. Beer was the first to use a loupe for external examination of the eye." Gorin, History of Ophthalmology.

According to another source, Beer "personally coloured the figures of abnormal eye conditions to ensure their accuracy." Weber's set is dated 1817, but it sounds like a the same edition. It probably just is a later issue, which makes sense if you consider how long it would have taken Beer to complete all the coloring for each copy.

Perhaps the most endearing aspect of this copy is the binding: it is sewn (all 600 pages) and simply covered in a beautiful Holland blue paper over very thin boards, with no printing or writing of any kind on the exterior. It's probably worth sending to Natasha Herman to be restored, even though the single volume probably couldn't justify the cost. A beautiful reminder of when publishing actually involved people working directly on each copy produced.