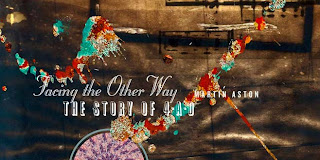 A follow-up of to Monday's post: securing a copy of Martin Aston's Facing the Wrong Way. We heard about the book last summer through Slicing Up Eyeballs ("the legacy of '80s college rock" - it's a Pixies quote: how HM appropriate), which reported the deluxe issue could be pre-ordered through Amazon.uk. So we pre-ordered a copy.

Early last month we received an update from Amazon saying the book would be delivered by early January. Kool. Over the holidays, poking around to see what people who'd already received copies of the book had to say, we stumbled across a 4AD fan's blog, 4adfirstdecade. Horrible design, completely unreadable all-caps Comic Sans or some such, BUT one immediately useful piece of information (typographically converted for easier reading):

"As a warning to all those looking to try and pre-order the the book, be aware that Amazon do not have copies of the limited edition on order to sell to pre-orders made on Amazon. Amazon may get some copies if the publishers don't sell all the limited editions and have some left to pass on. I fell into this trap with Amazon before when they list something they may likely never get their hands on......so buyers beware."

Huh. Having bought through Amazon only a couple of times in the past decade, we weren't hip to its nefarious ways & this was news. Checking the status of our Amazon.uk order (which, remember, we'd been told would arrive around now), we discovered the book hadn't even shipped yet, i.e. they didn't even have copies.

Luckily copies are still available through the publisher's site & we seem to have secured one that way. All of which is to say, shame on Amazon for appearing to guarantee orders it cannot; beware when dealing with portals like Amazon; always go directly to the source when possible; HM is not a source; contact our booksellers if you're interested in one of our titles.