Inexplicably, an Interview With HM 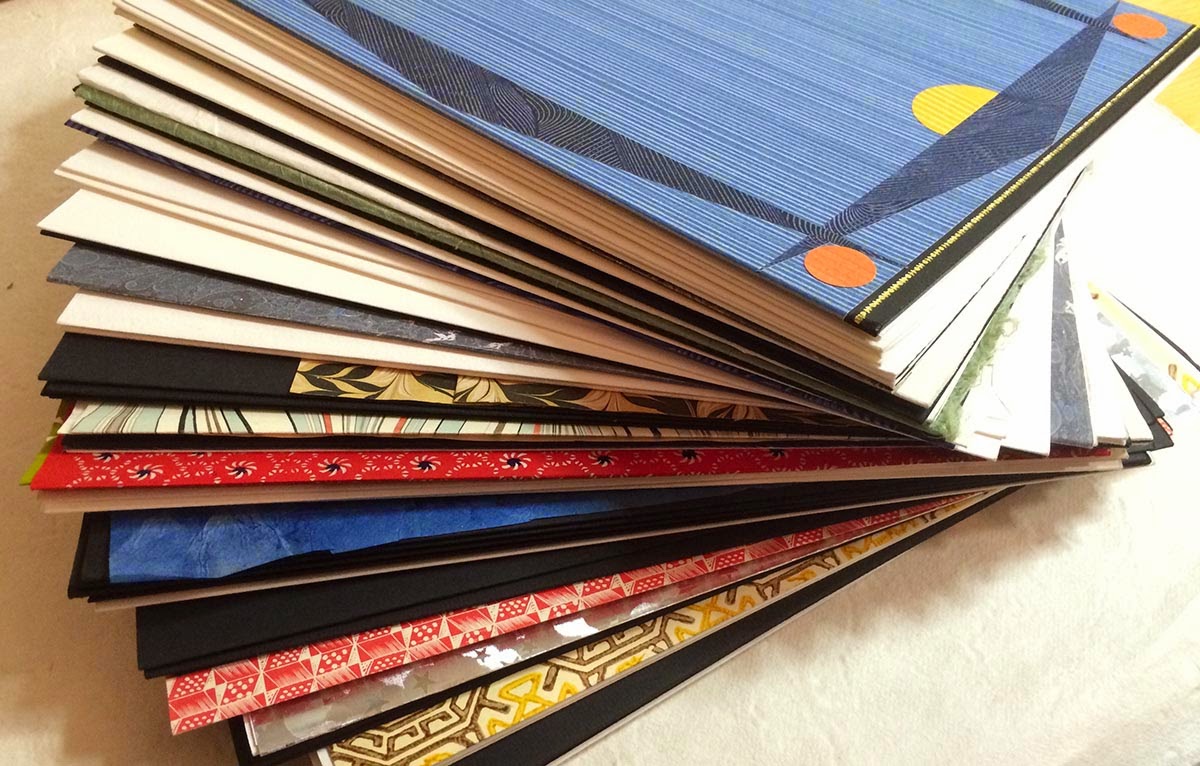 It's a Random Notes post this week. I left that Decorating Paper@Codex blog up so people could track down some details after seeing it at the show. I've been surprised at the almost complete lack of social media chatter about the book fair - before, during and after. The Foundation's own site links to a blog, but it hasn't been updated since spring of 2014. Bob McCamant supplied a summary of the four-day event on the FPBA's blog, but that's it. (He mentioned that the talk by Stanford's Robert Trujillo was "controversial among many in the audience," but he doesn't provide details; anyone who can expand, please write...) Seems odd in an age when people tweet or instagram their breakfast that we weren't treated to lots of photos of people & books. 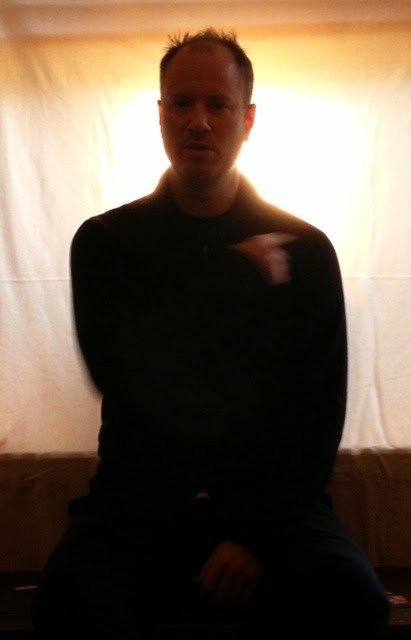 Next: through some terrible lapse in judgment, Books Tell You Why has posted an interview with/about HM. BTYW's blog editor, the lovely Andrea Koczela, probably was desperate for content. But check them out, they carry an interesting and unusually broad range of books for serious collectors. And if you're interested in reserving future HM publications, they're one of our most enthusiastic distributors. 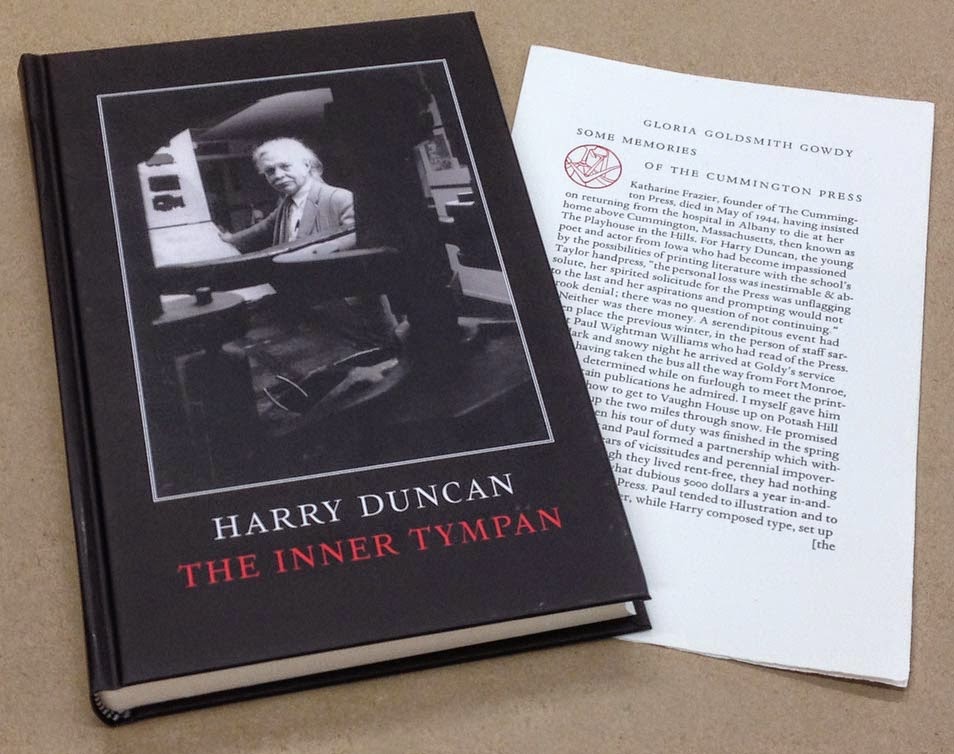 Harry's Duncan's collection of essays, The Doors of Perception, is one of HM's key books about printing with the handpress. This past weekend brought news of a new collection of Duncan's writings, The Inner Tympan. The book was collected and edited by Juan Pascoe, who had been a student/apprentice of Duncan's in the 1970s (I think it was). He describes the book as "an intellectual self-portrait: all the published texts written by him that we could find."

The first 100 copies of the book include a four-page insert hand set in Dante type and printed on Duncan’s Ostrander-Seymour handpress at Pascoe's studio, Taller Martín Pescador. Its text is a previously unpublished recollection of the early days of the Cummington Press by Gloria Goldsmith Gowdy, with a drawing by Paul Wightman Williams printed from the original line-cut used at the press for The Winter Sea, and Duncan’s pressmark,also printed from his original block. 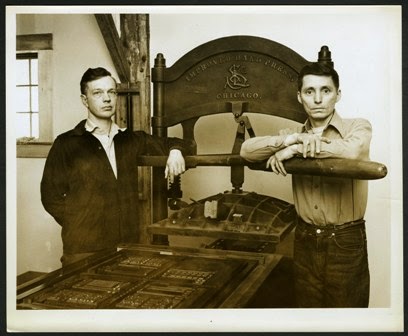 Bradley Hutchinson, whose name should be known to anyone interested in contemporary letterpress printing, assisted in the book's production. The original layout was done for a privately circulated version of the collection some years ago. Hutchinson used Pascoe's files for the new book, and "followed his typographic lead so the book retains Juan's idiosyncrasies, and a few Duncanisms like numbering blank pages and prefatory material--something already remarked upon by at least one perplexed recipient. We thought that adding the hand-printed insert would add a bit of the hand to an otherwise commercial production." Hutchinson is also coordinating distribution outside of Mexico.

Copies with the handpress insert remain available, but make haste.

Meanwhile, HM is poised to get back in the game: Details are being finalized for a new collection of (60!) poems by Harold Budd, accompanied by original art from Jane Maru, with whom he collaborated on two recent recordings from Darla Records. Publishing summer-ish? 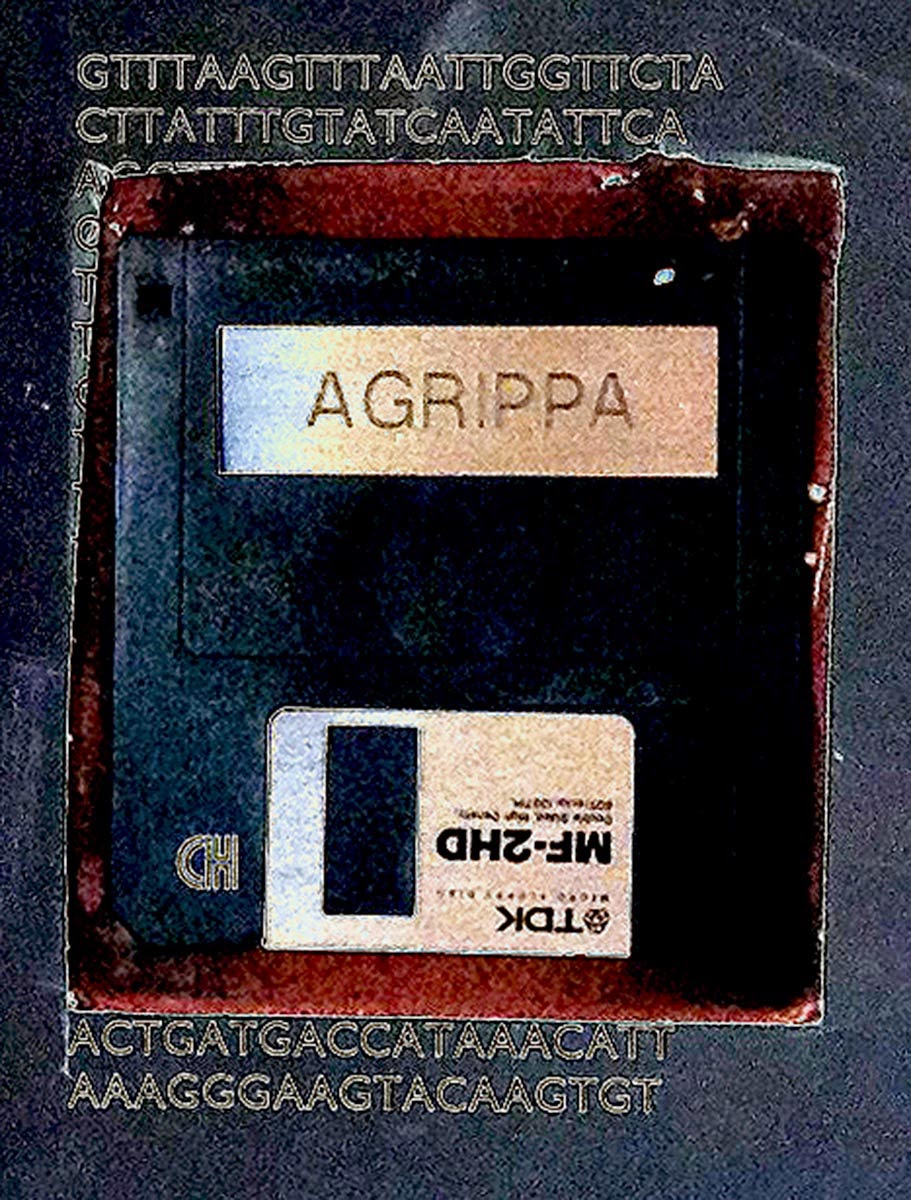 But first out of the gate will be a monograph summarizing the results of an investigation conducted over the past year into a bibliographic mystery: what exactly did (and did not) happen with the publication of the 1992 William Gibson/Dennis Ashbaugh collaboration, Agrippa (A Book of the Dead). The 48-pg softcover book (8 x 10.5") is printed in full color, with lots of illustrations, and will be distributed to the various people and institutions who assisted in the research.

Finally, for anyone who knew or visited the old HM studio, here's this: 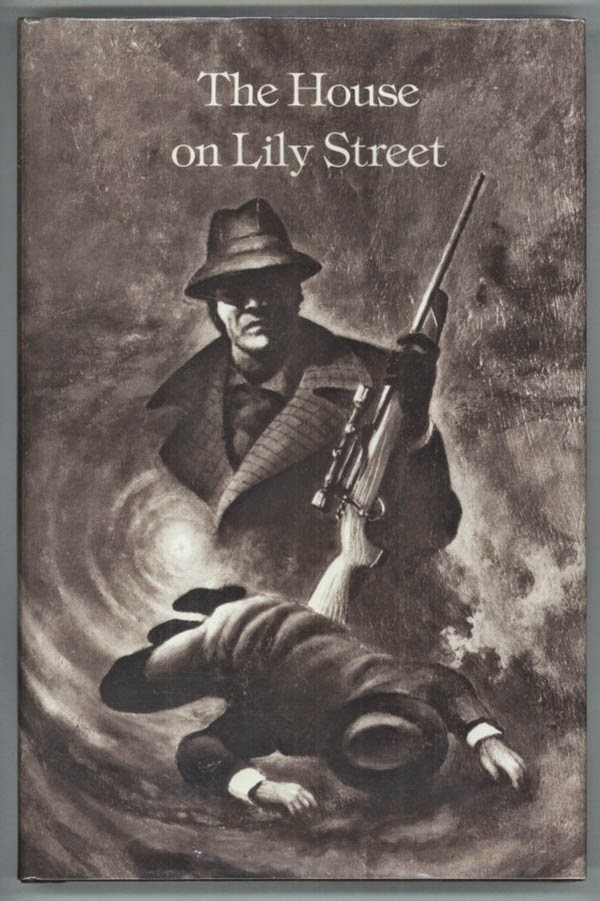