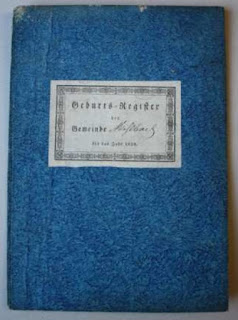 For all you decorated paper enthusiasts, item #1 from bookseller Barry McKay's latest catalogue:

"This collection of 161 examples of Franco-German paper decoration was salvaged by a German bookbinder in the 1990s from a collection of slender volumes of birth, marriage and death certificates from the Rhineland Palatinate in present- day Germany. The compilation of such volumes was introduced by French authorities after their occupation of the region in 1790. The French headquarters was the garrison town of Landau in der Pfalz, which is still the main town of the area. The region was an arrondissement of France between 1792 and 1813; thereafter it passed variously to Austria, Bavaria, and Prussia during the nineteenth century.

"The papers in this collection were salvaged by a German bookbinder in the 1990s. The papers are from covers of registers that were made to order in Kaiserlautern between the 1790s and the third quarter of the 19th century. The paper used for decoration during the region’s French occupation was manufactured in France. Thereafter the paper was manufactured at two mills by Roedter, and Gossler, in the village of Frankeneck near Neustadt and der Weinstrasse. 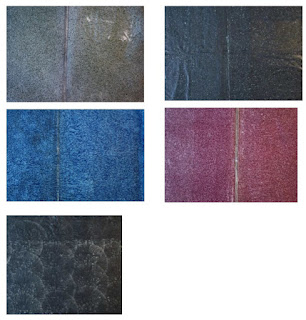 "Until about 1800 the boards consisted on of two pieces of thick paper laminated together, generally a coloured wrapping (usually blue) was used with a white lining paper. Thereafter a low-grade laminate cardboard was used. Some of the binding covers consist of a single sheet of coloured paste paper while others are formed of two pieces pasted together to form a whole.

"In the earlier period the volumes appear to have had manuscript labels pasted down on the front cover, perhaps with a distinctive shape for each year. ‘shadows’ of these labels are clearly visible on a number of the examples. From the early-mid 1820s, printed labels with the title and date set within ornamental borders were used in place of the earlier manuscript ones. 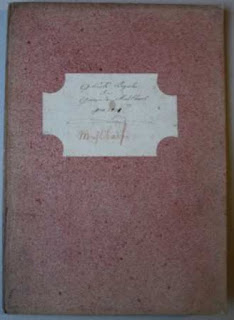 "The patterns found on these papers fall into four, very broadly classified, types: a sprinkled pattern, a simple dabbed- brush pattern, a paste & pull pattern, and a paste & pull pattern further ornamented with a circular patter thereon. The latter pattern is one that, based on our own experience, is achieved by dabbing a dry binders’ brush vertically down onto the coloured paste while it is still wet.

"Blue (of several shades) is the predominant colour used although there are also examples using black, green, red, purple, and sepia pigments."

The link to Barry's site (barrymckayrarebooks.org) doesn't seem to be working; if interested write to him (mail [at] barrymckay1.plus.com). The collection is yours for £3,950. Better hurry before Claudia finds out about it...