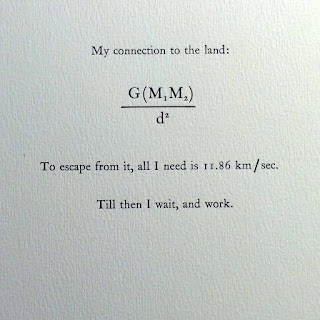 About eight years ago I was invited by the proprietors of a new, small press to contribute a text for a series of broadsides they wanted to print. The subject was Your connection to the land. They were (are) sweet people and I was flattered to be asked, but the topic is exactly the kind of thing that does not resonate with me. The other contributors wrote earnest odes to dirt etc etc; above is what I came up with. It is, if nothing else, entirely honest & genuine. Dug out recently because someone around here is studying gravity & related forces.

I read this line in a recent magazine article about a guy who has begun picking up abandoned books from New York City sidewalks: "They no longer had any exchange value..." It's not news, but it is jarring to have it stated so clinically.