The Point I Was Trying to Make... 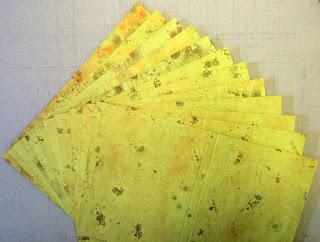 This is a coda to last week’s mess of a blog about limited edition books by (or “by”) musicians. I was aware while writing the post that it was failing to address the fundamental questions, So what and Who cares? My task of casing the Collector’s edition of Aurora Teardrops seems to stretch on to oblivion (that's a stack of cases waiting for textblocks, above), so I had a lot of time while standing at the bench since last Monday to ponder exactly what point I was trying to make. It boils down to the concept of the limited edition book.

The editions published by HM are constrained by time and resources. The calculus for balancing edition size and issue price is determined by a number of factors, some quantitative (cost of materials & labor) and some qualitative (how eagerly, or not, the market is anticipated to welcome the publication). The best case is when you bet low and the edition gets snapped up. Too many presses moan about lost profits when this happens, & if only they’d priced the book higher. These people are fools. Too many bet high, & also moan; they too are fools. At HM, production (i.e. printing) is broken into day-sized chunks: each run must be completed in a day. To get an edition of 50 I probably would print 70; allowing for set-up and makeready, 70 impressions of hand-inked type, printed on a handpress, dealing with damp paper, takes me eight to ten hours. If a run takes more than a day, you may as well let it take up all of the second day; that would mean an edition of 100 copies. Now you have 100 copies to sell, instead of just 50. That means more up-front costs, more time, more sales work, more shipping, and a lower issue price because then it’s a larger edition.

(This matter of printing damp is not inconsequential to the production flow: when working off a sheet over four days instead of two, it’s much trickier to sustain the paper’s dampness. It already goes to three days when adding a second color, and by then the sheets are noticeably drier than the day before. A handpress can only accomplish so much in a day.) 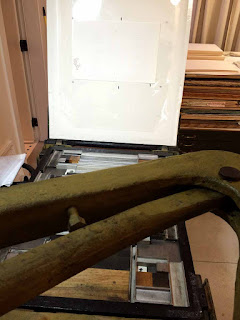 By letting production be limited to how many impressions can be pulled in a day, HM’s editions fall into some natural number. The more complicated the printing, the smaller the edition. Aurora Teardrops, which totalled 100 impressions per day (to yield 26 Deluxe and 50 Collector’s copies) pushed things to a limit; there were some long days. The constraints are different for people using mechanized presses (Vandercooks, Heidelbergs, etc etc) because so much of the work is being done by the press - that’s the point of a machine. And this is how most letterpress publishers print these days - they can burn off hundreds of impressions in the time is takes me to get my 70. But they still have material costs, and that tricky calculus of the optimum number to produce. Just because you can easily print more copies doesn’t mean you should. 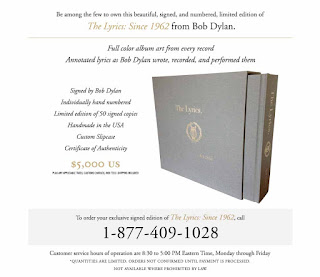 But none of the books mentioned last week were letter/private press-type books. They were all commercially-produced books printed by off-set litho, some of them from publishers for whom production costs are not a primary concern (ahem Simon & Schuster). The limiting of these editions really comes down to market demand. Except maybe the Dylan lyrics book: 50 signatures is maybe all the time & attention they could get out of Bob.

That book is a good example of my complaint about many of the publications: aside from a mostly arbitrary production limitation and a signature, the publisher doesn’t put any effort into making the book distinct from the usual trade books. There is no interest in making the book itself special or luxe, beyond the famous person’s signature. At its most egregious, it’s blatant profiteering, jacking the price for what essentially is the exact same book as the trade edition, but for the signature. Herb Yellin, the proprietor of Lord John Press, played around with this a bit in the '90s, arranging to buy a few hundred copies of a new trade book in sheets from the publisher, inserting a limitation sheet signed by the author at the front signed, putting it in a slightly better cloth case, and selling it for five or ten times the price of the trade issue (which often where the true firsts). He told me he got bored doing that pretty fast, like shooting fish in a barrel I think he maybe said. 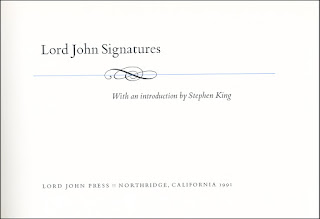 (Yellin produced the greatest of all books that exist only to present the signatures of famous people. It literally is just a collection of original signatures by famous [mostly American] people. That was the last LJP book. I’ll let you ponder whether that’s cautionary or laudatory…)

I haven’t seen it, but that Dylan book looks like all people got for the extra $4,800 was his signature on one of the preliminary pages. Same binding (a flat-back case for a book that is much too big & heavy) and contents as the other 2,950 copies produced. People who’d pay $5,000 would have paid $7,500, and then they could have had their copy in a beautiful, rounded & backed leather binding, something suitable for the size and weight of the textblock (and that premium is way more than needed per copy for such a binding…). 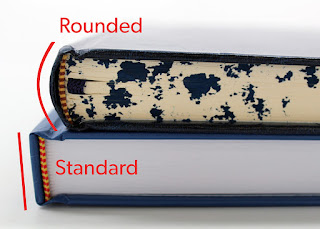 Returning to last week’s examples, Kevin Haskins’ Bauhaus book at least is physically different than the cheaper trade edition, and seems to be doing creative things with graphics and format. Please just make sure the slipcase is big enough. You don’t even really need one: cloth-bound books get worn from the slipcase. If the book is really so precious, it should be in a box. Slipcases are best suited for something like books in limp vellum. No cloth-bound hardcover really needs one. Put the money into a kool jacket instead. 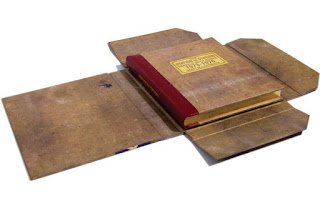 I shaded Genesis Publications a bit last week, but at least they are doing what I’m asking for here: creating books with special, unique content, only part of which is the famous person’s signature. And it looks like they care about things like printing & binding. There may be a little reverse engineering happening - working back from access to the signature to book conception - but they have produced some books that look like fun.

So that’s my point: contemporary commercial publishers should explore opportunities to issue some books in a special, “limited” and luxe format, when the content warrants and the market is interested. I like signed books, especially commercially published ones because it may be the only time a human touched the thing. But don’t be lazy: don’t just stick in a signature. Get a designer with some thoughts - and preferably some knowledge about book binding - involved. Make it worthy of the limitation (however arbitrary that may be) and the signature.