Purely by happy coincidence, last weekend we stumbled across a passing mention of Pressure Printing, Brad Keech's studio specializing in fine prints by contemporary artists. HM's interest was piqued because most of the artists he has worked with are recruited from the worlds of graphic arts and comix, i.e. Jim Woodring, Tony Millionaire, Gary Baseman and Kim Deitch. 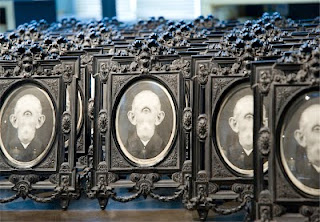 A fellow handpress printer (he uses an Albion), Brad's Denver studio is also capable of intaglio printing. His background is in marketing and design (he currently handles most of the design work for artist Mark Ryden's Porterhouse imprint & online shop), and he brings these talents to Pressure Printing, working with the artists not just on the technical aspects of the print, but also designing and making custom frames or packaging (for lack of a tony-er word) for each project, such as Mark Mothersbaugh's "Grandma Cyclops" (above & below; "Grandpa Cyclops" shown at top, appeared a few years earlier). 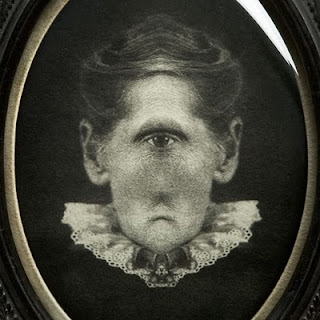 Pressure Printing's site offers an excellent overview of the its publications since starting, in 2002. Brad averages a few prints per year, with editions ranging from a handful to 100. He seems to have attracted a loyal following, as most are O.P. No books per se, but several portfolio collections, at least one of which (the deluxe edition of Baseman's Unattainable Beauty) could be described as an artist's book. 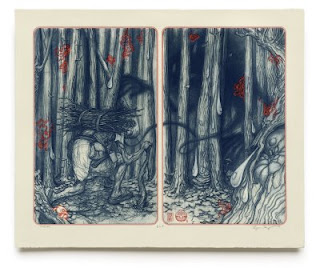 The site also links to a blog that is full of additional details and asides about projects. It's worth poking around in: the June 2009 archive includes details of a project that seems characteristic of Brad's interest in the exactitudes of printmaking. The print, titled "Kindling," was created by artist James Jean for a fundraiser held at Pixar Studios,  with director Hayao Miyazaki, to save the Totoro Forest. It's a diptych intaglio print, overprinted in relief (polymer) with a second color, issued in an edition of just 10 copies.

It's always energizing to encounter someone like Brad who is so clearly dedicated to the demands of traditional printmaking techniques, but using them to create contemporary work that pushes at the edges of form and content.