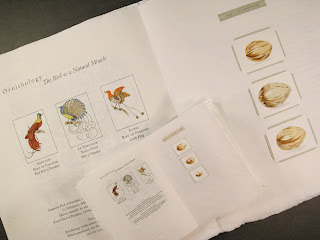 Having perfected and streamlined her technique with the big copies, Barbara Hodgson practically tore through coloring & embellishing the eight miniature copies of The WunderCabinet. (Ten actually, with the two printer's proof copies she kindly undertook as well.) She sent along these photos of completed miniatures, displayed with their full-size progenitors. Still no definitive plan on what to do with them, except that a copy will accompany each of the authors' deluxe boxes, and the publisher's as well. That leaves five in play; watch this blog for details of how and when they will become available. 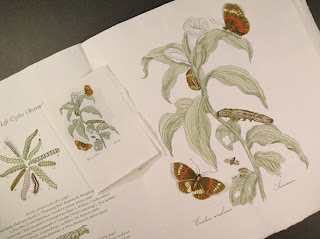 We asked her for a few comments about the book (in its two forms). She replied with the following:

"Who knows what drove me to tackle the creation of this 33%-of-full-size book, when most of my resources (motor control, eyesight, patience) had already been expended. Ultimately, it must have been the challenge, combined with an enduring fascination for miniscule handmade objects. 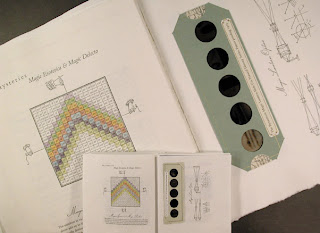 "The eight copies took about five days to embellish. The small version is an almost exact replica of the larger one and includes a pressed Dicksonia antarctica fern, a working volvelle and a magic lantern slide of natural history images.

"Claudia Cohen will be joining the madness and binding these copies once she has finished binding the full-size edition." 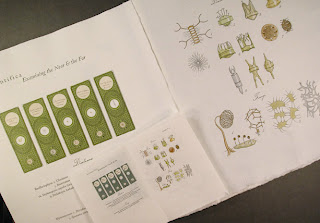 HM checked in with Claudia this week. The black leather has arrived from Harmatan for the deluxe copies, and the those boxes are well underway. We had expected to be debuting one of the regular (1/20) copies at Codex next February, but now Claudia's thinking that we may have a deluxe one (1/10) ready for display. Either way, the book will be at Vamp & Tramp's table when Codex opens on February 6. 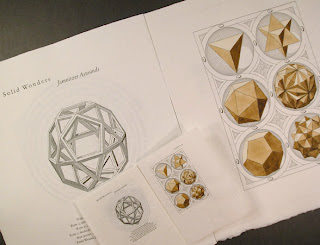