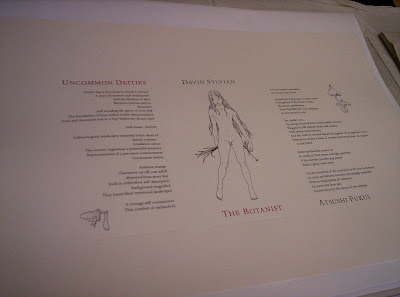 Over two days this past week we printed the broadside Uncommon Deities, with a text by David Sylvian and illustrations by Astushi Fukui. In a previous post about this project, we stated it was just our second attempt at a broadside. That's incorrect; it's our third. We'd forgotten about this lovely Alice broadside printed for Mariko Ando.

Uncommon Deities was, however, certainly the largest piece we've ever printed on the Washington. The sheet measures 22 x 15 inches; the text area is 16 x 9 inches. The set-up of the press had to be completely changed to accommodate the piece. The platen bearers had to be relocated to fall outside the area of the sheet, and the points had to be positioned on the far side of the tympan, where the top of the sheet would be (the top inch of each sheet, where the pin holes lie, will be trimmed off). None of our roller bearers were long enough for the form, so we had to cobble a straight run of 20 inches on either side of the forme from shorter pieces of 12-pt rule.

The text lies in two columns, each with one or two lines that extend well beyond the rest. This always makes even inking and impression a challenge, but five hours of makeready and using layers of tape to build up the roller bearers at the extremities of the forme evened things out. So, having started at 9:30 a.m., we were able to begin pulling usable impressions by 3 p.m. The edition is 30 copies, but with three runs per sheet and our general ineptitude, we printed 50 to allow for spoilage. We finished printing the black shortly after 8 p.m. on the first day. Nothing happens quickly at HM. 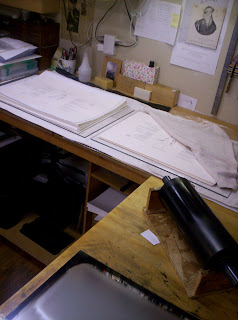 The text was set in 14-pt Dante and Dante Titling. The 200-g Arches paper was printed damp. Using quite a dry ink slab, the roller was charged twice for each impression (we ascribe to Harold McGrath's strategy of using as little ink as possible on the roller, and building it up on the letterforms with successive passes). The photo above shows part of the ink slab, the roller, and the two piles of paper during the last run: the sheets to be printed (covered by damp towel), and the printed sheets (stacked between blotters, the first step in drying them down). 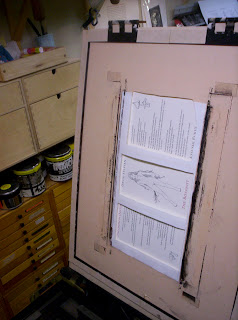 The second day went more quickly, with just two lines of red in the second run, and two lines of small type (the copyright & limitation statements) printed in blind at the bottom. The photos above & below show a sheet in the press after the last run. 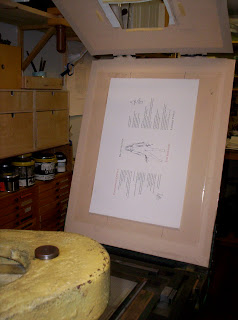 The sheets must now circle the globe to be signed first by David, and then Fukui. Will spent the weekend building a big box strong enough to protect them during their travels.