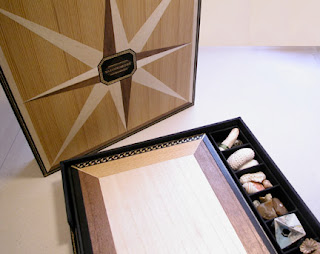 Printing The WunderCabinet took three months in the HM studio earlier this year; one day last week we printed off eight more complete copies. Chalk and cheese: these latest copies are shrunk down to what felt like 2-pt type, pages small enough we could print two entire signatures (8 up) on one sheet (vs the 2-up folios printed for the edition).

Why? is the obvious question. The answer has faded from recollection, but ties back to Barbara & Claudia's first collaborative book, The Temperamental Rose (2007). For that book, Barbara had made a miniature mock-up as a reference for the printer. When the project was wrapping up and we were collecting all the bits, we asked if HM could keep the little dummy. Surprised by our interest, Barbara instead proposed making three proper miniatures, one each for HM, Claudia and herself. Here's what she came back with: 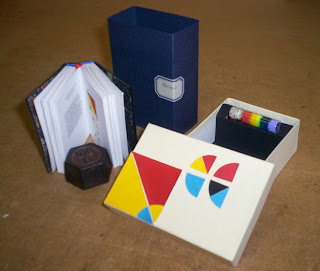 The book, which measures 2 x 3 inches, is complete in every aspect, right down to the hand coloring, embellishments, pop-ups and even the glass vial of dry pigment. But all that work on pages that were, at the end of the day, just printed digitally. Thus, in the early days of The WunderCabinet, some wise-ass suggested doing this again, but this time with the text printed letterpress. Always being up for a challenge like this, Barbara had polymer plates of each page made, shrunk down to about 30% of the original size. When Reg Lissel completed the paper for the book, we culled some of the 100% linen sheets that were particularly thin. And there it all sat, as HM avoided the issue and did other things. But a promise is a promise, so last week we finally set things up in the press, damped the tissue-thin paper, and got down to the work. 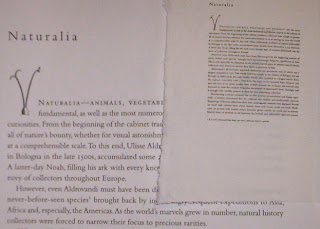 The type on the plates was so small that positioning the eight pages to ensure correct margins & back-up was tedious and strained the eyes. We weren't sure just how the very small pages, with lines that were already very fine in the full-size version, would print; perhaps not at all, or perhaps as a muddy stain. 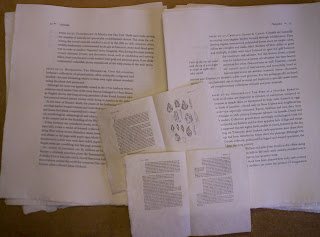 One of the advantages of printing on dampened paper is that significantly less ink is required to achieve crisp letterforms, and this is especially important when the letters are so small. To our pleasant surprise, the plates printed wonderfully. The biggest challenge was that the paper would begin to dry in the short time between pulling the first impression, re-inking the type, and turning the sheet to back it up, so careful haste was required.

Seven signatures of two sheets each took about eight hours to print off (five sheets printed for each signature). Most of that time was taken up with just getting the pages correctly positioned. Two days later the sheets were dry, pressed, and ready for trimming and collating. Barbara and Claudia have plans to bind up eight copies, the pages hand-colored and enhanced just as they are in the life-sized edition. We hope they do not lose their eyesight on such distractions. 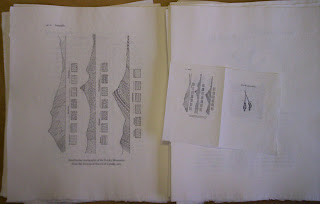