Balloons Falling on Will Rueter's Night 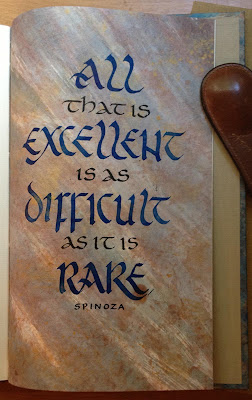 Take a page from Will Rueter's book. Here's one from his most recent publication, Pressing Matters. The ten deluxe copies, from the edition of 50, each include this page of original calligraphy by him. The calligraphy itself is fantastic, but the idea of doing it on this paper elevates technique to artistry.

Pressing Matters is just one of the topics that will be touched upon when Will is interviewed this evening by HM publisher Rollin Milroy, at an evening honoring his work and career. It is free to the public, and being held at Simon Fraser University's downtown campus. Details here.

In response to the call for printers and presses to create a broadside to mark the occasion, as usual HM has cheated a bit. Broadsides really aren't our forte. We struggled to think of sufficiently interesting content. Then, a few weeks ago, we had a conversation with Claudia Cohen that turned toward publishing a second collection of her paste papers (this time with some text). The idea percolated after hanging up, and this (vague) announcement of our one-day plans came to mind.

Very simple. The fun would be in using the various scraps and offcuts of her papers that we keep, no matter how small, to create patterns & designs around the text. Our initial idea had been to use long strips to weave through the sheet, similar to her cover for Chasing Paper. But when we started sketching ideas, that didn't really take.

Our pencil kept coming up with highly regimented & symmetrical patterns that looked very planned, while her designs always seem natural and unforced. 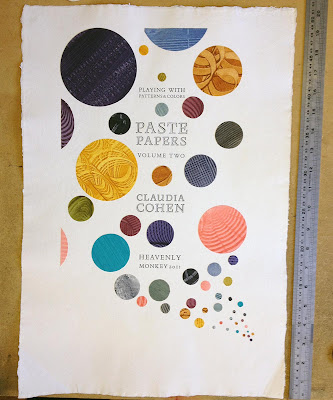 The one idea for something random and asymmetrical was what we called 'Falling Balloons." Claudia approved; she thought it looked like champagne bubbles. 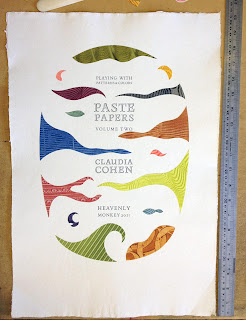 Then we came up with one last idea, also asymmetrical, and did that up. It's OK, but we'll do the rest of the sheets as bubbles. We only printed six sheets (all on heavy pieces of Reg Lissel's HM Text): one for Will, one for Claudia, two for HM, and two for messing up. Hopefully ours won't be completely shamed the others broadsides on display.