The Council of Perfection 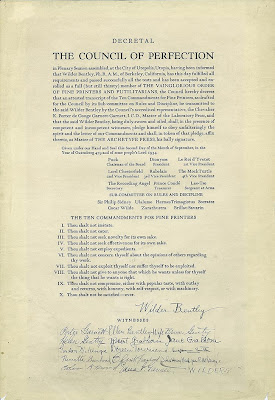 This won't count as HM's official broadside contribution for Will Rueter's investiture later this week, but it's something we've had on our office wall for a few years [a most excellent gift] and wanted to make a few reproductions of, since who will ever see it otherwise?

The year of this Decretal's execution, 1934, was the year Wilder Bentley and his wife Ellen established the Archetype Press [motto: The fine printer begins where the careful printer leaves off]. He'd spent the previous few years working for Porter Garnett at his Laboratory Press. What we have here presumably was intended to celebrate the press's formal declaration of establishment, witnessed [and, one suspects, repeatedly toasted since they make a point of mentioning their thirst] by some of the most famous names from American fine printing at the time: Porter himself, plus Robert & Jane Grabhorn, John Henry Nash and Bruce Gentry. How many similar copies certificates of enrollment in the The Vainglorious Order of Fine Printers & Futilitarians are in existence?

The commandments are applicable for just about any endeavor one undertakes.

While drafting this post, it was surprising to realize that, while Bentley's name was well known to us among the pantheon of American printers from the first half of the last century, we couldn't actually tell you why. And so some quick Googling. He was, like all good printers, a devotee of the Washington-style handpress.  He seems to have been, first & foremost, a scholar and a poet. The press was in commercial operation only until America entered WW II, and its most famous commission probably was Ansel Adams' Sierra Nevada: the John Muir Trail (1938). He spent the years after the war teaching. For a more complete biography, see the extract at the bottom of this post from The Berkeley Daily Planet.

"As a designer and typographer for his book, [Ansel] Adams chose Wilder Bentley, a craftsman printer whose Archetype Press in Berkeley he knew through the Roxburghe Club of printing enthusiasts. In the early 1930s Bentley has presented a series of twelve public lectures at the University of California at Berkeley on the 'History and Esthetics of Fine Printing.' In 1934 he and his wife established the Archetype Press, printing a variety of original books on commission. Three years after the publication of Adams's book, Bentley wrote an an article for U.S. Camera about the evolution of the project and his own role as designer. He answered the criticism that the tipped-in photoengravings simulated actual photographs by explaining that tipping in the plates was the only way to avoid the halo of oversprayed varnish around a reproduction that had been printed as well as varnished on the same stock. Adams had passed this technique on to Bentley from his experience with the London publisher The Studio in the production of Making a Photograph (1935). 'Modern,' Adams explained to Bentley, 'means the appropriate contemporary means in contemporary function.' "
From Ansel Adams: Divine Performance by Anne Hammond (p.  49)

From 1975 to 1985 Bentley revived the Archetype Press to publish, in 26 parts (each one issued as a scroll, some as long as 15 feet), a poem titled The Poetry of Learning (see here for details on a set that sold at auction, and see here for Rulon-Miller's descriptive listing of a set they have on offer). Although he intended the edition for each scroll to be 100 copies, it seems only about 39 complete sets were ultimately issued. He died in 1989. 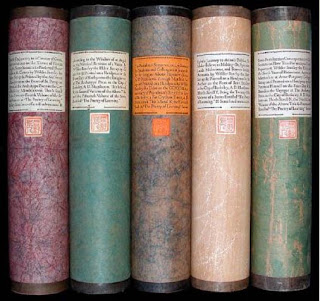 For the other signatures on this Decretal, look them up yourself. The Book Club of California issued an excellent collection of the writings of Porter Garnett. If the name Grabhorn isn't familiar, maybe start with Blumenthal's The Printed Book in America, and go from there. Ibid for JH Nash.

The reproduction we'll issue to mark Will's receipt of the Robert R. Reid Award for contributions to the book arts in Canada will be giclée printed on rag paper, in the same manner as the Oddballs poster we did a while back. It's scanned from our original, tears, dirt & all. We'll produce just a few (with a line at the bottom identifying it as a facsimile, not that it's hard to tell), to give to friends.

From The Berkeley Daily Planet, 2007:
"...Perhaps the most interesting figure in the Bentley family was Harvey Wilder Bentley (b.1900), the eldest of Charles H. Bentley’s children. Wilder (after his mother’s maiden name) graduated from San Francisco’s Lowell High School in 1918. He attended Yale University and the University of Michigan, then spent several years in Europe providing relief work with French war orphans and later traveling.
Wilder married Ellen Mayo in 1927. In the late 1920s, he was at the University of Oklahoma, where his book The art of Laurence Pickett Williams (1930) was published. From 1930 through 1933, Wilder worked at Porter Garnett’s Laboratory Press at the Carnegie Institute of Technology, honing his skills in the craft of fine printing. In 1932, he became an honorary associate member of the American Institute of Graphic Arts.
Having returned to Berkeley with their two young children, Wilder Jr. and Margaret (later Sevcenko), Wilder and Ellen settled at 1836 San Antonio Avenue. They found an old Acorn hand press that had been shipped around the Horn, bought it, and established a small publishing business, producing limited editions of finely printed books, portfolios, broadsides, scrolls, and cards.
Their earliest publications were broadsides in the Acorn Series, beginning with Wilder’s own Excursion on the Bay and Unheroic couplets for the poets of New Albion (“Printed on the Acorn Press in the Thousand Oaks”). The following year, they began publishing under the Archetype Press imprint and opened a shop at Euclid Court, on the commercial block just north of the campus. Wilder taught Ellen how to set type, and it was she who did the typesetting and proofreading, in addition to sewing the books that Wilder designed. Their motto was “The fine printer begins where the careful printer leaves off.”
One of the items Wilder “and his faithful spouse, Ellen” published at Euclid Court was N’en Parlons Plus!, Excerpts From Divers Papers & Chronicles of The Arts Club, 1937–1938. This 20-page folio was limited to 105 copies and issued for private distribution among members of The Arts Club and their friends.
The Bentleys also printed William Saroyan’s A Native American (San Francisco: George Fields, 1938) in a limited edition of 450 copies, each signed by the author. By far the best-known book to emerge from the Archetype Press was Ansel Adams’ Sierra Nevada: the John Muir Trail (1938). In addition to being a photographic masterpiece, the book became a promotional tool on behalf of the Sierra Club’s campaign to establish a new national park on federally owned land in the Kings River Canyon region southeast of Yosemite: Ansel Adams sent a copy to Harold Ickes, secretary of the Interior. “The pictures are extraordinarily fine and impressive,” Ickes thanked him. He hoped that Congress would soon establish the park: “Then we can be sure that your descendants and mine will be able to take as beautiful pictures as you have taken—that is, provided they have your skill and artistry.” Ickes showed the book to his boss, Franklin D. Roosevelt, who kept it for himself. Kings Canyon National Park was established two years later.
With the advent of World War II, the Bentleys closed the Archetype Press. The printing press was dismantled and stored in the basement of 2683 Le Conte Ave., which Wilder and Ellen had purchased from his aunt Mary’s estate.
In addition to his printing activities, Wilder Bentley was a prolific poet, calligrapher, and brush artist. The Bancroft Library houses a large collection of his poetic output, practically all of it printed by the Archetype Press. In May 1943, the M.H. de Young Memorial Museum in San Francisco exhibited his brush drawings.
After the war, Wilder Bentley returned to teaching. Between 1946 and 1956, he was professor of English and Philosophy at the College of the Pacific and Stockton Junior College, both in Stockton. In 1957, he was appointed professor at San Francisco State College, where he taught until his retirement in 1971. A former student described him as “a white-haired, elderly, enthusiastic expositor of the beauties and significance of American writing” who “was well-known in the college, if not beyond it, as one of those professors who is an inspiring catalyst for receptive students.”
Following his retirement from teaching, Wilder dedicated himself to the epic poem The Poetry of Learning (Archetype Press,1975–85). A collection of 26 scrolls (some rolling out to about 15 feet in length), it was printed on an 1870s-issue Palmer & Rey “Washington”-type hand press in the basement of 2683 Le Conte Ave.
Wilder Bentley passed away in 1989. His widow Ellen continued living at 2683 Le Conte Avenue until 1996, nearly a century since the Rev. Dr. Robert Bentley purchased the lot for his retirement home"