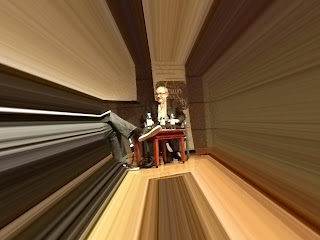 That title is a quote from Will's interview with HM publisher Rollin Milroy prior to receiving the Robert R. Reid Award last week. We were talking about shared desire to express a passion for music through printing. As you can see from the photo above (by HM-JR=L2), lots of fun was had by all during the evening.

The audience included Stan Bevington (Coach House Press), Rod Macdonald, and Jan & Crispin Elsted (Barbarian Press), plus several members of Vancouver Letterpress League. The interview with HM went well, with neither Milroy nor Will making fools of themselves. It ended with a short quiz that promised "to tell us all we need to know about who Will Rueter is." He was given a series of choices to make; his reply for each is underlined. 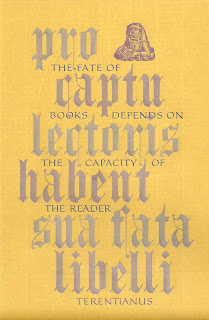 Some cool broadsides contributed from across the country, as far east as Gaspereau Press and several from the 416 area. Will, being an established master of the form, beat everyone with the piece (above) he printed for the occasion.

Photos of the event are posted on the Alcuins' flickr page. An article recounting the evening's discussion will appear in a future issue of Amphora.