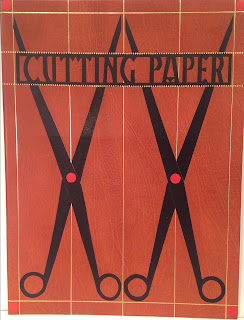 Claudia Cohen continues the work of binding & assembling copies of Cutting Paper. She usually leaves the deluxe copies for last, and this is no exception. Shown above is her maquette for the front board: where the regular copies were in a case made from different cut and woven handmade papers, the deluxe will be leather with onlays. But as with most Cohen/Hodgson projects, what really makes these copies deluxe is the extra material included on the box: an expanded selection of cut-paper examples, including a unique photomontage, a 19th-century katagami, an original Image d'Epinal, two large Chinese paper labels, and an abstract white cut.

The deluxe copies of Cutting Paper are being shipped out over the next month or so. As with the regulars, they are sold out. But at least now you've seen the binding.