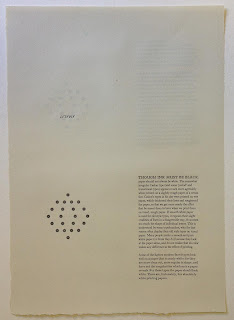 Started printing Paper Should Not Always Be White. Worked through six of the approximately 25 kinds of paper we'll be using: five kinds of Barcham Green and Amalfi. Five handmades and one mould made. These six offer a good initial color spectrum, from white through tones of cream, to illustrate Updike's point. 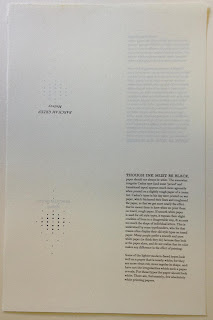 In typical fashion, we underestimated how long thinking up & setting the patterned arrangements for each paper would take. But it's fun. 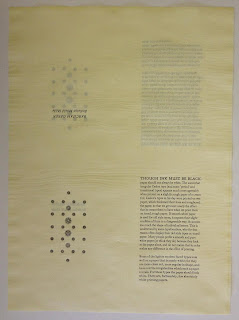 Thought up an apt metaphor for the project, when describing it to an acquaintance whose point of reference is musical rather than printing: changing the paper the text is printed on is like changing the room in which a piece of music is played. Each room's unique acoustics affects how the same recorded piece of music, played through the same system, will sound to us. Each paper's color and texture affects the look of the type printed into it. It will also be interesting to compare how the text looks after each sheet dries: based on just the six printed so far, there is significant variation in the amount of expansion when dampened, and thus the amount of contraction after printing.

p.s. figured out a way to print four-up, work & turn, so printing each sheet is two book sheets.