Some recent handpress activity on eBay reported by comrades. But before we start, let's review that irrefutable statement above. A handpress is not only operated, but also inked by hand. And we're increasingly realizing that it's the inking that makes the difference.

So, over at eBay: someone in Indiana who is only casually acquainted with English and its grammatical norms is selling some handpresses. One is pretty much the sibling of HM's Ostrander-Seymour Extra Heavy: 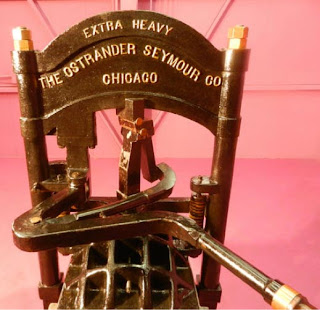 The paint job on this one is a lot spiffier than HM's, but the press is also missing a few important bits, starting with the tympan & frisket. "By doing some Research, I have found that this press was manufactured in the area of 1920 to 1923. or thereabouts." Not just research, but Research. Sics all 'round in that sentence. At $8,000 there were no bids before the auction ended, but it's still listed for sale. Maybe not an unreasonable price for a complete press, but the tympan and frisket could cost another grand. 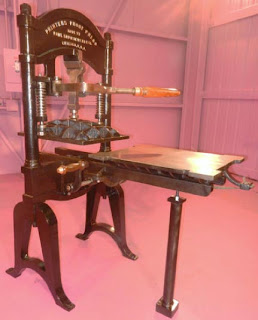 Same guy also has this smaller "Washington Hand Printer's Proof Press" (correct use of apostrophe this time, but a nonsensical phrase). Inexplicably, the listing description states this is the only handpress currently for sale on eBay. Yours for $6K. Once again, no tympan. Don't underestimate how difficult it can be to get one made, especially if the person making it has never seen one and doesn't understand how the press works. HM's press came without a frisket, and getting one made was a hassle: the first iteration was made from a stainless steel frame and weighed a ton; the second was lighter, but the hinges (to the tympan) were set just a hair too proud, so that when the tympan was folded down & the press run in, the hinges struck the edge of the platen. Ugh. 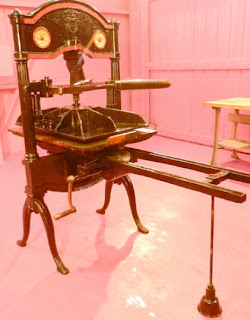 But here's the real money piece, in that the price is insane: an "extreemly" important piece of American history, a Rust 23 x 36" Washington-style handpress. This one's on auction till about 5 PM PST, so it'll be interesting to see if anyone bids. More interesting Research in the listing (who needs books if you have an Internet connection?). A steal at $40,000? And once again, without the tympan? Admittedly these are uncommon, but they're also so large that not many people are interested. Last one we knew of was sold from BC about a decade ago, shipped to Japan to be displayed in the foyer of a large printing company. Priced at $12,000, and complete with all its bits.

All pedantic jibes about grammar and spontaneous capitalization aside, the seller knows about T&Cs vis-a-vis purchasing a ton or more of iron FOB. Potential buyers take note: buying a handpress isn't for wusses. When the foundling HM bought its press, in the almost pre-Internet days, the seller was a kind & patient person who wanted the press to go to a good home. Not only did he arrange for palleting (dis-assembled, the press travelled on two pallets plus the frame [staple] on a third), but he videotaped the tear-down, to aid in the press's assembly. That we no longer have a machine on which to play said tape is a bit of an issue. Should probably get it digitized sooner than later, especially with all this talk of a new studio etc etc.