Keeping It Together, Pt. 2 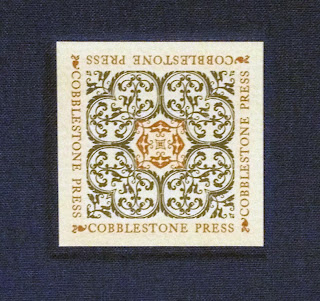 A few more of the collections we finally got 'round to boxing and printing labels for. (Setting & printing one label - which takes a few pulls till you get a good one - has a lousy return on time invested; you spend your whole time wondering why you never got good enough at calligraphy to do the labels by hand.) 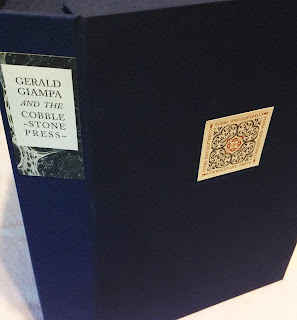 Gerald Giampa (or as he referred to himself, Giampa™) was an infamous presence in the (tiny) Vancouver printing community in the 1970s and '80s, and it's really only an interest in our own local scene that's responsible for having accumulated a collection of his work. He was a toxic human whose life left a wake of destruction wherever it veered. His reputation well preceded him, so when he returned to Vancouver for the last time, in the early aughts, we avoided him like the plague he was. Jim Rimmer, who was the talent that allowed Giampa to participate in some of the earliest attempts at digitizing metal types, wrote an honest but not spiteful obituary after Giampa's death in 2009, and it's worth reading. It was originally written for the FPBA's journal Parenthesis, but they spiked it and ran one by Robert Bringhurst instead, which focused more on his work as a typographer and less on the man. Jim was quite offended by the rejection, but his piece ended up being printed in the Alcuin Society's mag, Amphora. Unfortunately the society does not include the obit in its online extracts from Amphora. Jim had a turbulent relationship with Giampa - which seems to have been the only kind possible with him - but there also was an underlying friendship that remained to the end. Type foundry P22 has done an excellent job of maintaining the site Giampa created to chronicle his many battles and triumphs; it can be a little clumsy to navigate (use the Onward button, top left), but it's worth clicking through. Gives a good sense of what Giampa™ was like. 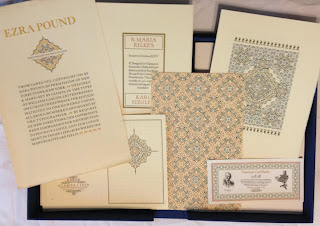 Most of what Giampa printed was ephemeral. His most sought-after title is a single-signature extract from one of Ezra Pound's Cantos. All of Giampa's work is recognizable for his interest in using ornaments to create multi-color patters and borders (he was a self-annointed Fleuron Master). This was an interest that Jim Rimmer adopted, and much of his private press work incorporated repeating patterns built up from ornaments.

Another part of our Vancouver printing collection was recently boxed: Ross Lort's All Creatures Great & Small. This is an alphabet book done in linocuts and type, published by one Charles Bradbury in 1931. Don't know much about Bradbury, other than he apparently published two other books. Lort's book was limited to 200 numbered copies printed on Van Gedler paper. It's sewn side-stab, with a printed paper wrap. An uncommon book; but what might be even more uncommon is the trade version that Bradbury issued (same year). It's trimmed very slightly smaller, is printed on different paper (machine-made wove), and lacks the limitation statement at the front and colophon at the back. Otherwise it's identical in every way. 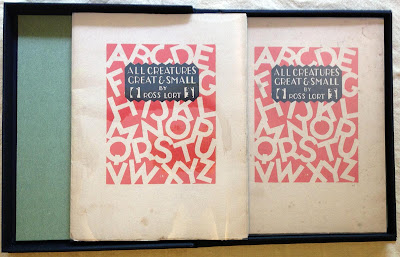 Lort didn't do any other books, to our knowledge. He did continue doing some relief print making, including this cover for a monograph/promotional catalogue on West Coast Native pottery designs, printed by Robert Reid in the early 1950s. He went on to became a recognized West Coast architect. 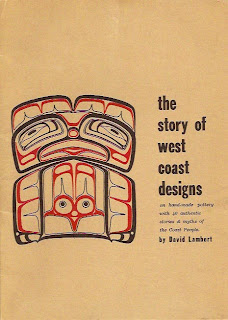 And we finally got a box made to contain our collection of items related to Kara Sievewright, including all the original 'zines of hers that led to our edition of The Girl With the Mask of a Crow (still one of our favorite HM titles).