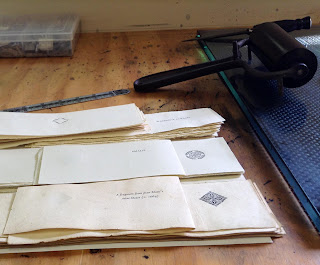 Part of the inspiration behind Paper Should Not Always Be White was putting to good use the small batches HM and others had accumulated over the years - a few sheets of this, a few of that. But some of the sheets (about half) had to be slightly trimmed to fit the book's page dimensions. We allowed some variation in width and height, but there's a limit to that before binding becomes overly complicated and, rather than being charming, the book looks like Frankenstein's monster.

Cleaning up the studio after the sheets had been collated & shipped to Claudia, we were left with long, narrow strips of 12 different papers; some Barcham Greens, a few early 20th century sheets, even the remaining scraps of the Blaeu atlas pages. About half were handmade and half mould. All of them much too lovely to discard or abandon. So, we're making another book.

The paper strips range in width (i.e. height) between 2 and 3 inches, so making the book a miniature was obvious. That's a format we've flirted with in the past but aren't really endeared with: too small & fiddly. But in this case, it works. Each sheet is presented as a folio, like they were in Paper Should...., with the maker's name printed on the first recto, and a diamond shaped pattern on the second recto. Some of the strips are wider, and those samples will include a fold-out at one edge to fit the book. 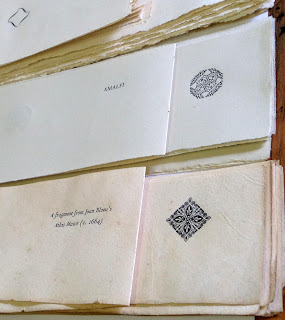 The page will measure just under 3 by 3 inches (as big as we can go while keeping it legitimately miniature). Because the strips were so long, we're able to print with a side-by-side work & turn form. And, it was the perfect project for the little Pratt Albion,* which hasn't been used since its inauguration about a year ago. Yesterday was the first day or printing - we ran off the Amalfi, Warren H. Colson and Blaeu sheets - and the Albion was great. The width between the roller bearers is short enough, and the area being inked small enough, that we're able to use a hand prayer instead of the big roller. The only problem is that the bed doesn't glide back and forth like the Washington; it takes some cranking. There's no shortage of oil in the rails; I think the rails and the bottom of the bed just need to be polished with a few thousand passes. 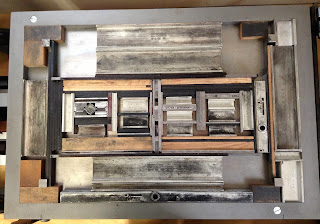 The current plan for binding entails Barbara Hodgson dyeing some of Reg Lissel's paper, as part of her current research for Around the World in Colour, printing it at HM with a pattern and title, and then putting it over thin boards for a case binding. There will be a dozen different papers (48 pp.), with a two-page preface. The text is set by hand in Perpetua, and printed in different colors. The edition will be 25 copies; all will have a dozen paper samples, but they won't all have the same 12 samples. Hope to get the printing finished before the end of the week, and have the whole thing wrapped up before Labor Day. It's proving to be a good warm-up for the type sample book, which still doesn't have a title. Nor does this latest distraction, but we should have one by Thursday's post. 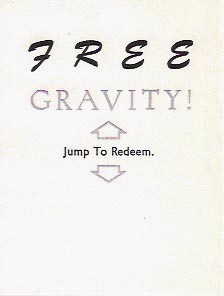 * We very briefly toyed with the thought of hauling out the old Kelsey 5 x 8 toy press and using that to print this book. After all, we were so committed to it all those years ago! Plus, printing would be a lot faster. But crappy, too: the Kelsey was hauled out last month to help a bored teenager pass a few summer afternoon hours, and we were reminded of just how useless & weak those things are. But the Heavenly chimp did set and print her first project, a coupon. The text occurred while walking through our colorful (i.e. sketchy) neighborhood on a hot summer day; the layout and setting are all her (limited to the drawers of type she was allowed to use....). When it was done, chimp said - in a polite way - that she hadn't realized how fussy & boring printing was.