It's September: Cover Up 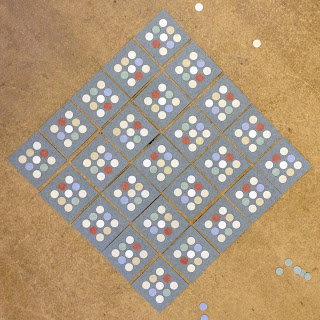 Got sidetracked over the weekend making a frontis for Uncommon Paper. Can you tell who we've been hanging around? It's made up from pieces of nine of the 12 papers used in the book. There are better ways to go blind. 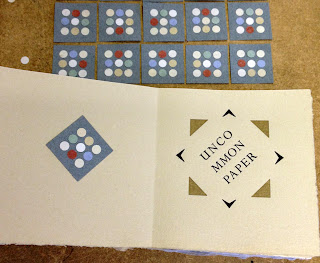 Also printed the paper to cover the boards. Tried it in silver but didn't look good. Black always looks good. Now that the cover paper's been printed, we'll case in the test copy & see what adjustments need to be made. Barbara has warned that PVA reacts with the natural pigment used to dye the paper, so it'll have to be wheat paste. One problem miniature books can have is a tendency to not lie flat; they're always a little popped open. Part of the problem is the lack of weight from boards. Trying to minimize, or eliminate that altogether (without resorting to quarter-sewn oak boards). 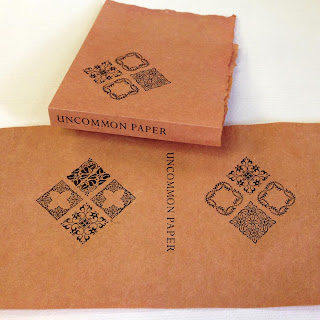 As reported, the edition is 26 lettered copies. Some of those have to be given to collaborators on Paper Should Not Always Be White*, so we'll probably have only about 18 to offer. Price will be $300.

* Speaking of, first copies of the regular edition will be shipped from Claudia's studio this week. We'll send a note out to everyone as/when their copies are posted, so they can be on alert. The deluxe copies are underway & remain on track for end of the month-ish.