A Letter from David Ferry, & A Papier P.S. 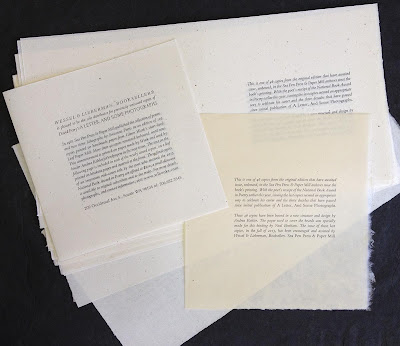 Remember that Sea Pen Press & Paper Mill post from a while back? Well, we spent last Saturday printing a sort-of collaboration with that imprint, and through it, with American poet David Ferry. In 1981 Sea Pen published a collection of Ferry's poems titled A Letter, And Some Photographs in an edition of 120 signed copies. It included two stone lithographs by Sea Pen's Suzanne Ferris. As so often happens with small- and fine-press projects, not all of the copies were bound at the time. In fact, 46 remained in sheets, packed away.

Since 1981, Sea Pen's Ferris and papermaker Neal Bonham closed the mill, and Ferry went on to accumulate awards and honors, most recently the National Book Award for Poetry. With some encouragement from Mark Wessel, Ferris and Bonham decided to make the remaining copies of A Letter... available, to celebrate Ferry's career.

The copies issued in 1981 were bound in quarter vellum by Gray Parrot (per the colophon). The 2013 copies are being bound - differently - by Andrea Kohler: black paper cast specially for this binding by Bonham, with a ibyx laser-cut into the front board, and the boards edged top & bottom in leather (a millimeter-style binding). 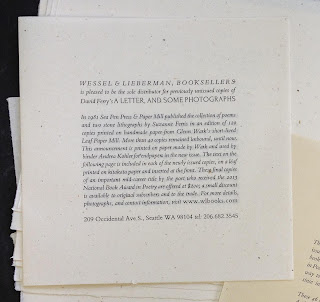 HM's small contribution was a printed leaf to be inserted at the front of the book, explaining the history of these last 46 copies. The text was set in Bembo (same as the poems) and printed on kitakata. We also printed a folded prospectus that includes the text from the insert; this was printed on pieces of a lovely laid paper made by Glenn Wark, whose long-defunct Leaf Paper Mill also provided the paper for the book. The prospectus paper is a laid sheet, quite smooth (appears cold pressed), with inclusions. This same paper is being used as endsheets in the binding by Kohler. (In typical HM fashion, there are fewer copies of the prospectus - I think we managed 35 - than there are of the piece on offer. Prospectuses are very boring to print.)

According to Ferris, Leaf Paper closed down a few years after publication of A Letter..., and Wark disappeared from sight long ago. Too bad, because he made beautiful paper. The poems in A Letter... were printed by Ferris on a heavy (200 g?), very white & smooth sheet (dampened).

These remaining copies are available only from Wessel & Lieberman, Booksellers, priced at $200. More details and some images are (or will soon be) available on their site.

P.S. you guys liked last week's le Clert post; our biggest seller ever. A thought occurred, post-posting, that puts the publication into some contemporary context: Each copy has about 540 pages (including blanks). Assume each page is one-quarter of a full sheet of handmade paper (i.e. each full sheet was torn in half to make a book sheet, and each copy needed 270 book sheets). That's 135 full sheets per copy. Assume you could get full sheets of that beautiful paper for $5 per (which is ludicrous; they'd be closer to $10). Let's say they printed off 725 copies (allowing for minimal wastage). That means today, just the paper alone for a project like Le Papier would cost almost half a million dollars, and probably closer to twice that.