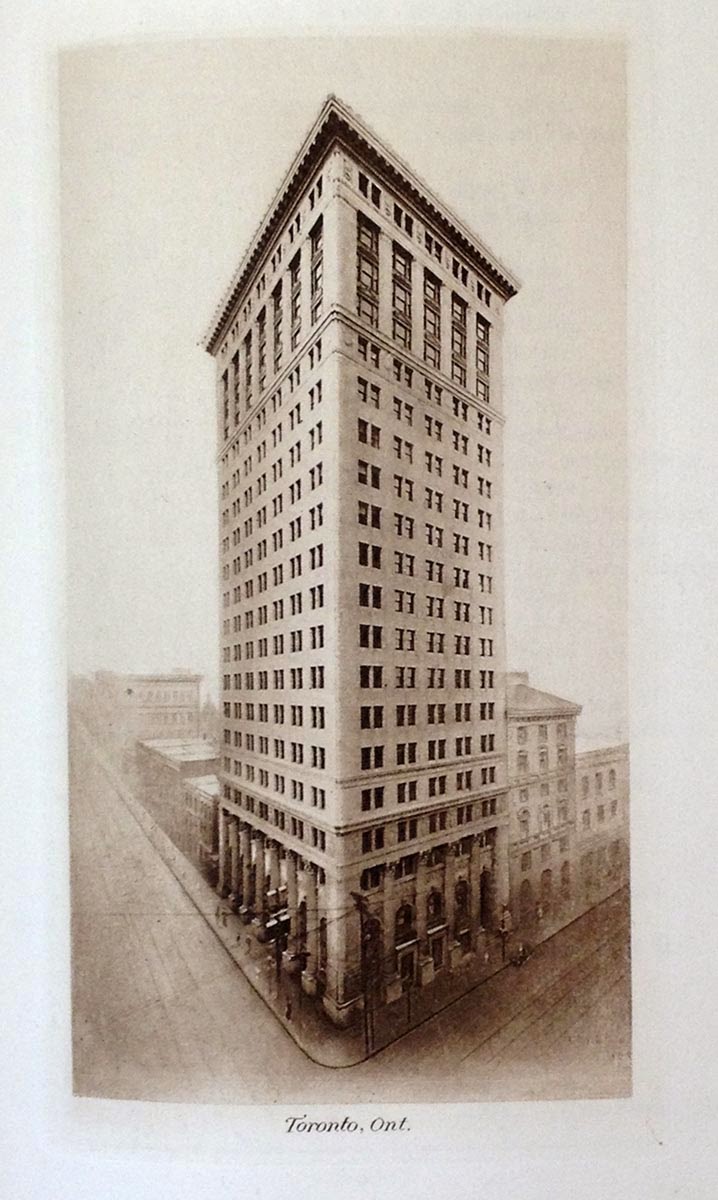 America was built by cowboys and oilmen, Canada was built by bankers and insurance salesmen. Something like that. Here's a story to illustrate the point.

Walked by a local used book shop last week. Chalkboard sign out front announced "Antiquarian Sale." There was a table of dreck inside: orphans from sets, a few books in polished leather bindings with the boards detached, general detritus. Most interesting thing I saw was a monograph titled Esoteric Astrology. Talking to the very pleasant woman who seemed to own the place, she explained they were getting out of antiquarian books, focusing just on newer used books. I wasn't sure they'd ever been in the antiquarian books business, but whatever. I spied, at the bottom of a tottering pile behind her desk, a slipcase. What's that? It was this: 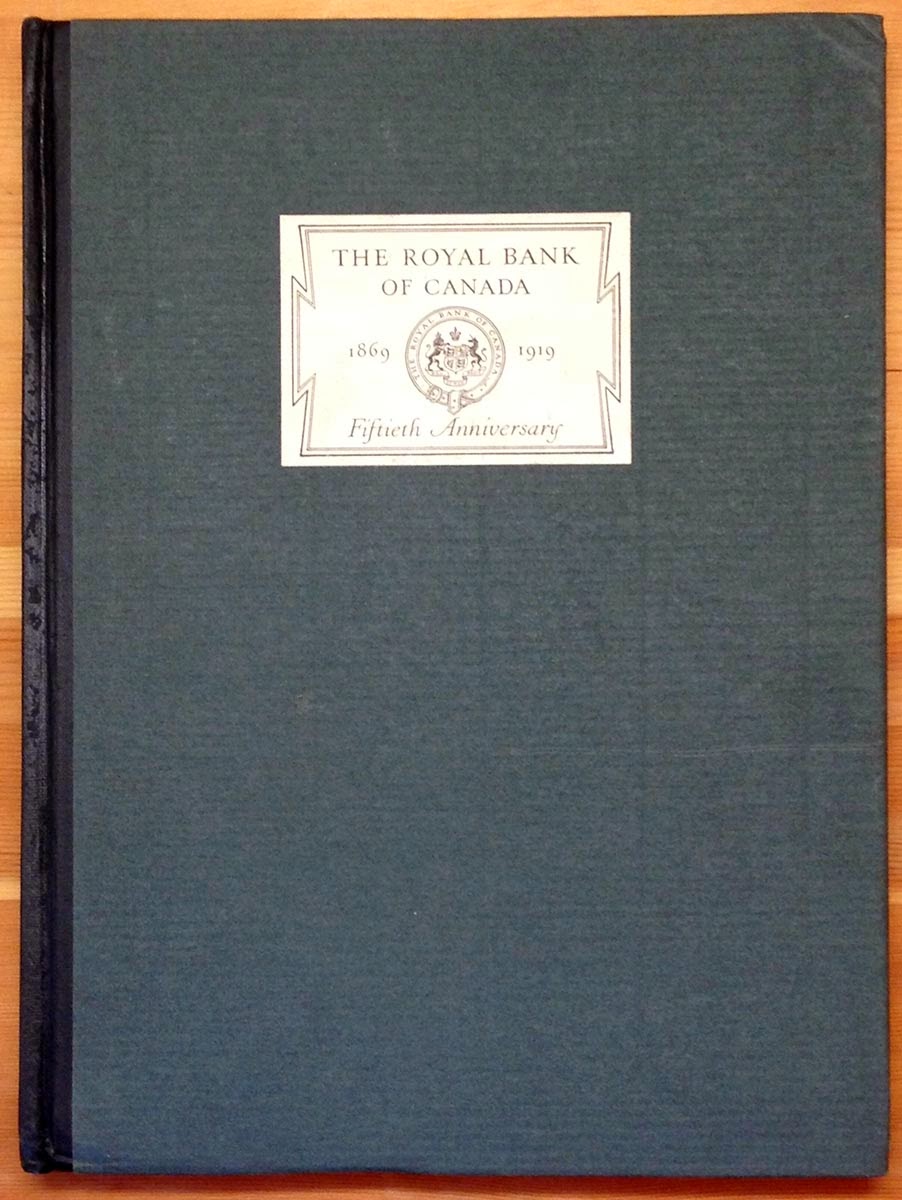 And first glance, and even second, the book is deathly dull, lying somewhere between annual report and a high school yearbook. But for thems like us, before you even get to the title page & realize what a bore it is, you notice the paper, and the watermarks: 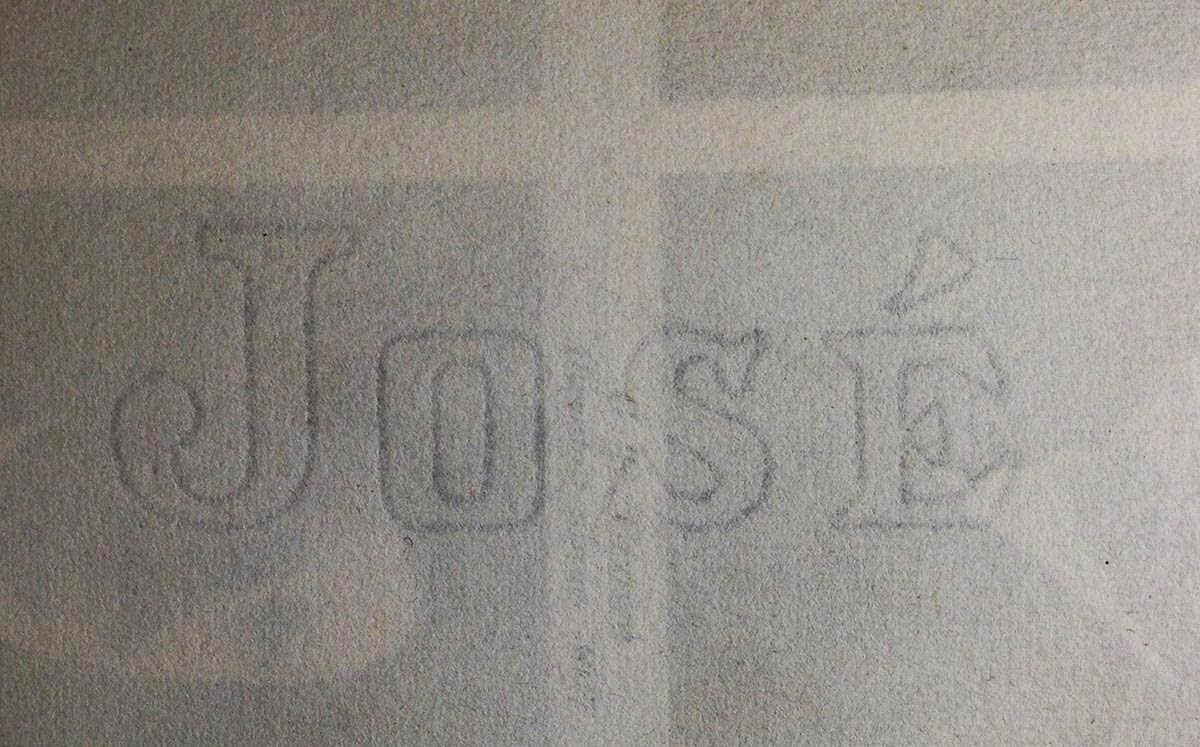 None other than the same Guarro mill that provided the 1960s mouldmade upon which HM has published several books over the past ten years, including Oddballs and Types/Paper/Print. (My suspicion about the nice lady's bona fides as an antiquarian bookseller were confirmed when she asked, What's a watermark?) I have previously seen just one full sheet of handmade paper bearing the Guarro watermark, at an intaglio studio. I've never seen a book printed on handmade Guarro. I tried to resist, but for $25 I was saving a fortune in beautiful paper from the scrap heap. 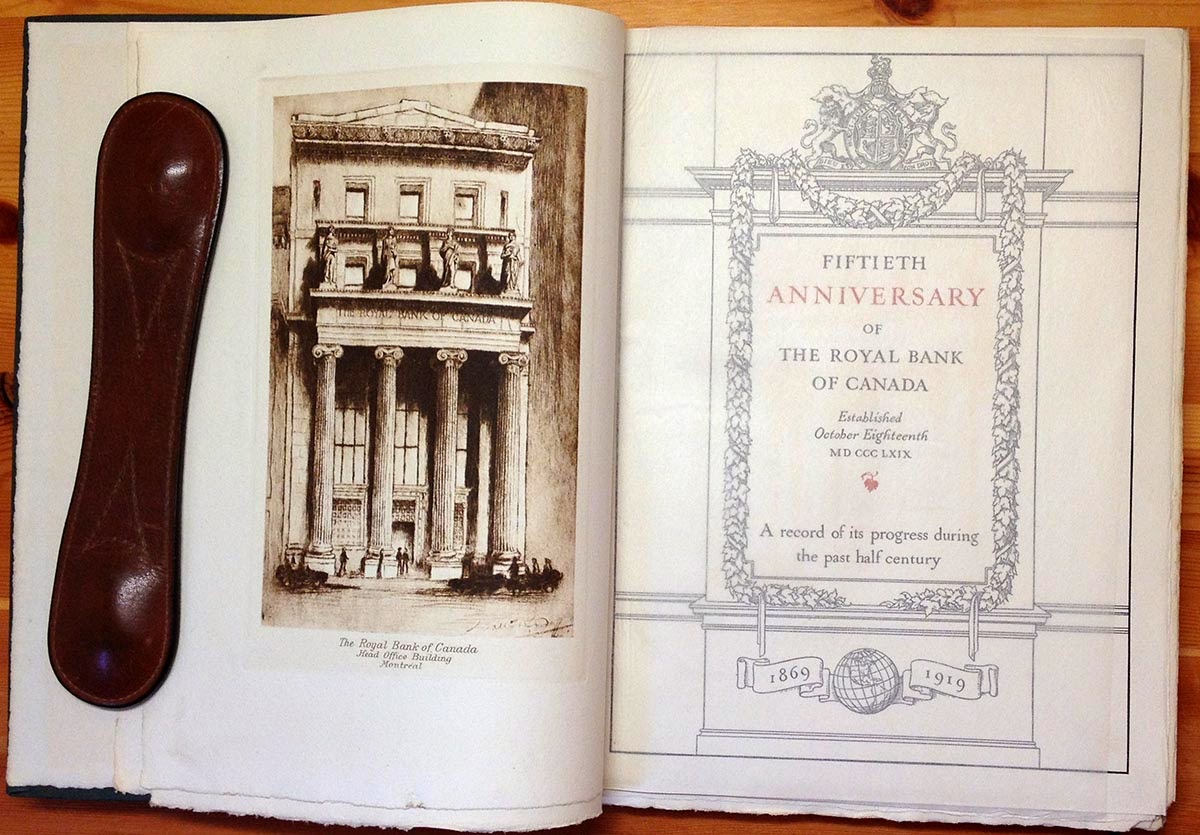 As a piece of publishing, it's an interesting specimen (I'm not justifying the $25 here: I'm justifying the space this thing will take up in my life). There's a copyright (Montreal, 1920) but no colophon or information about the printer. The typography is functional and of a journeyman caliber for the period. The text is set in some Caslon variant, the word spacing none too carefully attended. The text was not printed damp as it should have been on this lovely paper, trop mal. Maybe that's why they used the hot pressed surface for the text, but still. 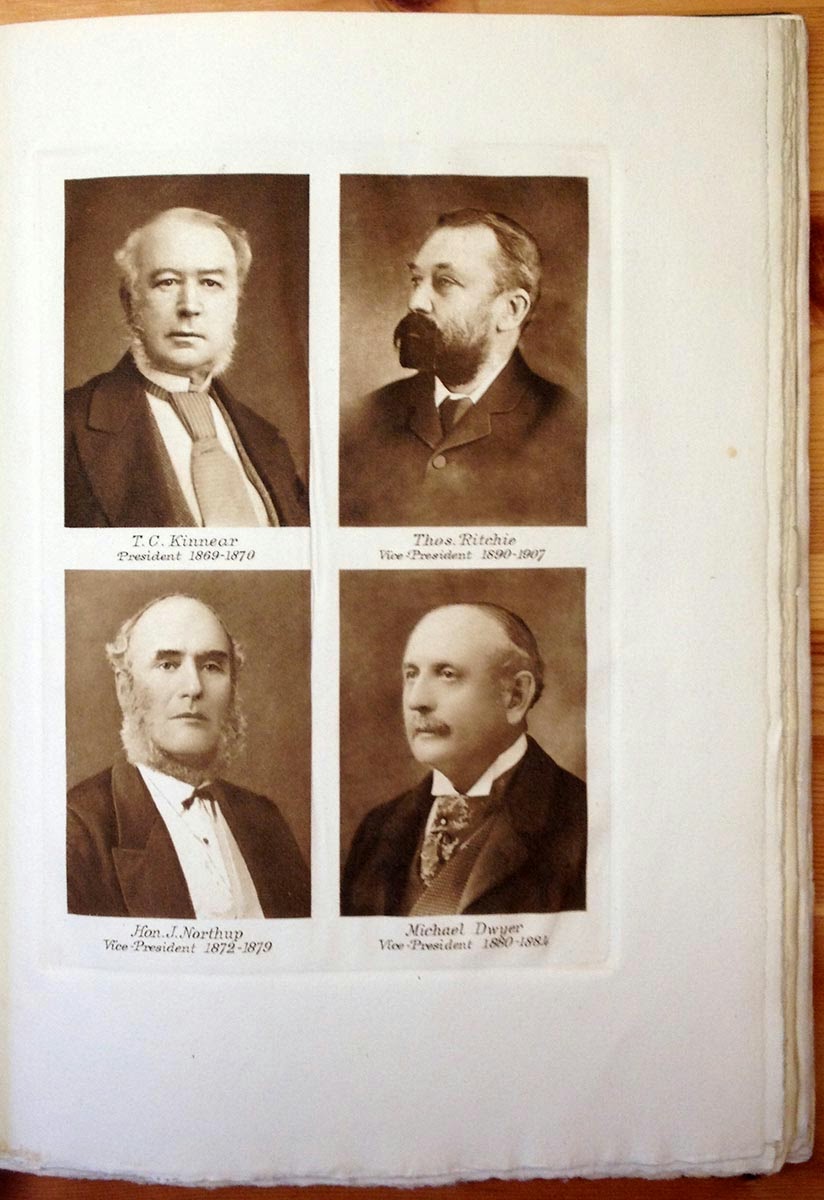 The numerous photogravures, however, are beautifully printed on the NOT paper (damp, as this method would require), rectos only, and nested into signatures to alternate with text pages. They are protected by sewn-in sheets of whisper-thin handmade gampi (looks like; might be kozo, but I think gampi). Most of the images - various directors & other important personages - are interesting only for the glimpses into muttonchop fashions of the time, but there are also some images of the bank's various offices near & far that are skillfully rendered and architecturally interesting. So, for someone simply interested in printing, it's worth $25. 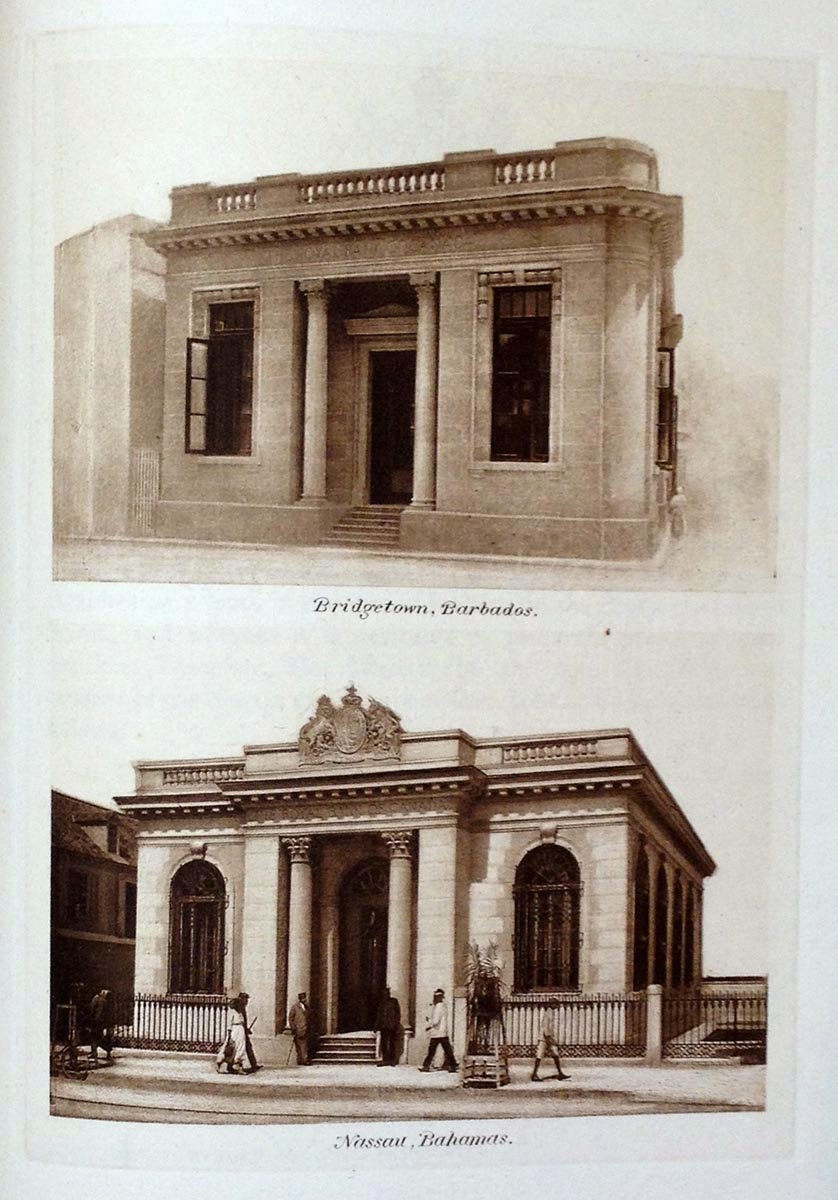 Laid into this copy is a presentation card from one Mr E. L. Pease. Flipping through the book we find he was Managing Director of the head office when this book was issued. 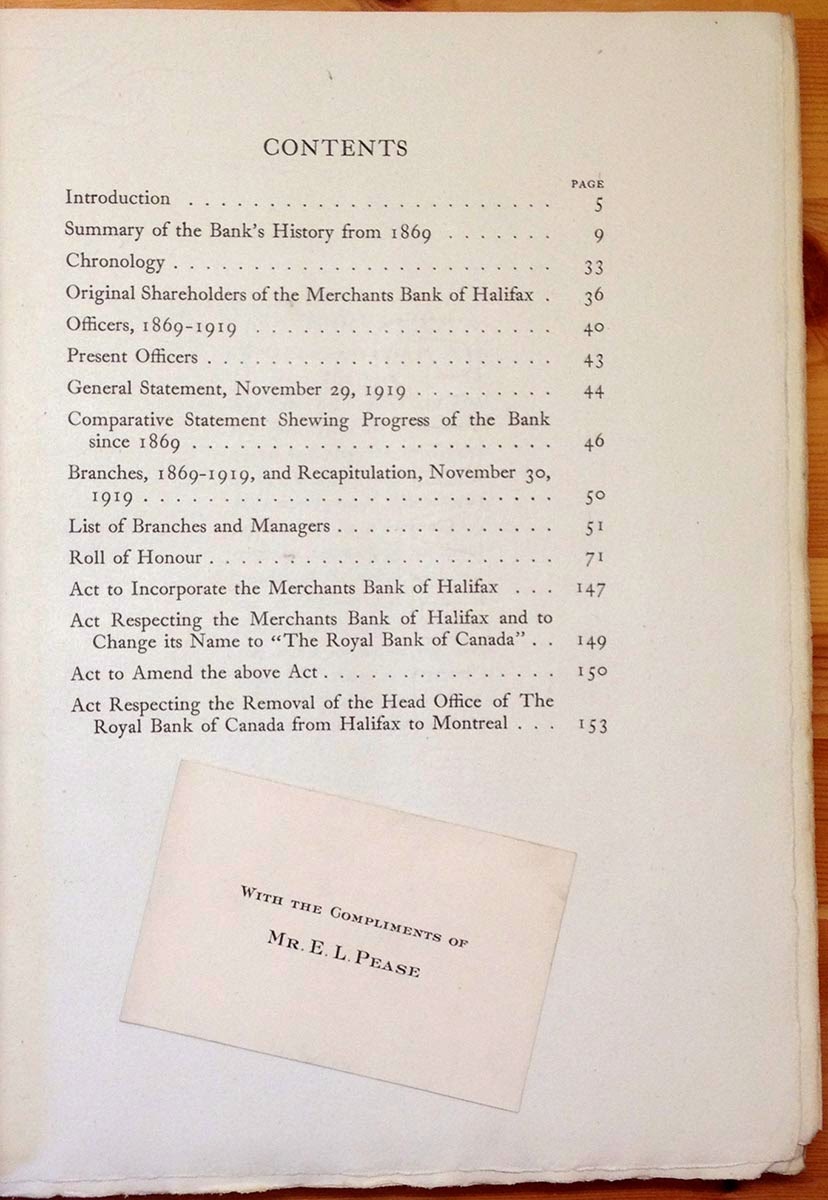 Old Peasey was even high enough on the ladder to get his mugshot in the book: 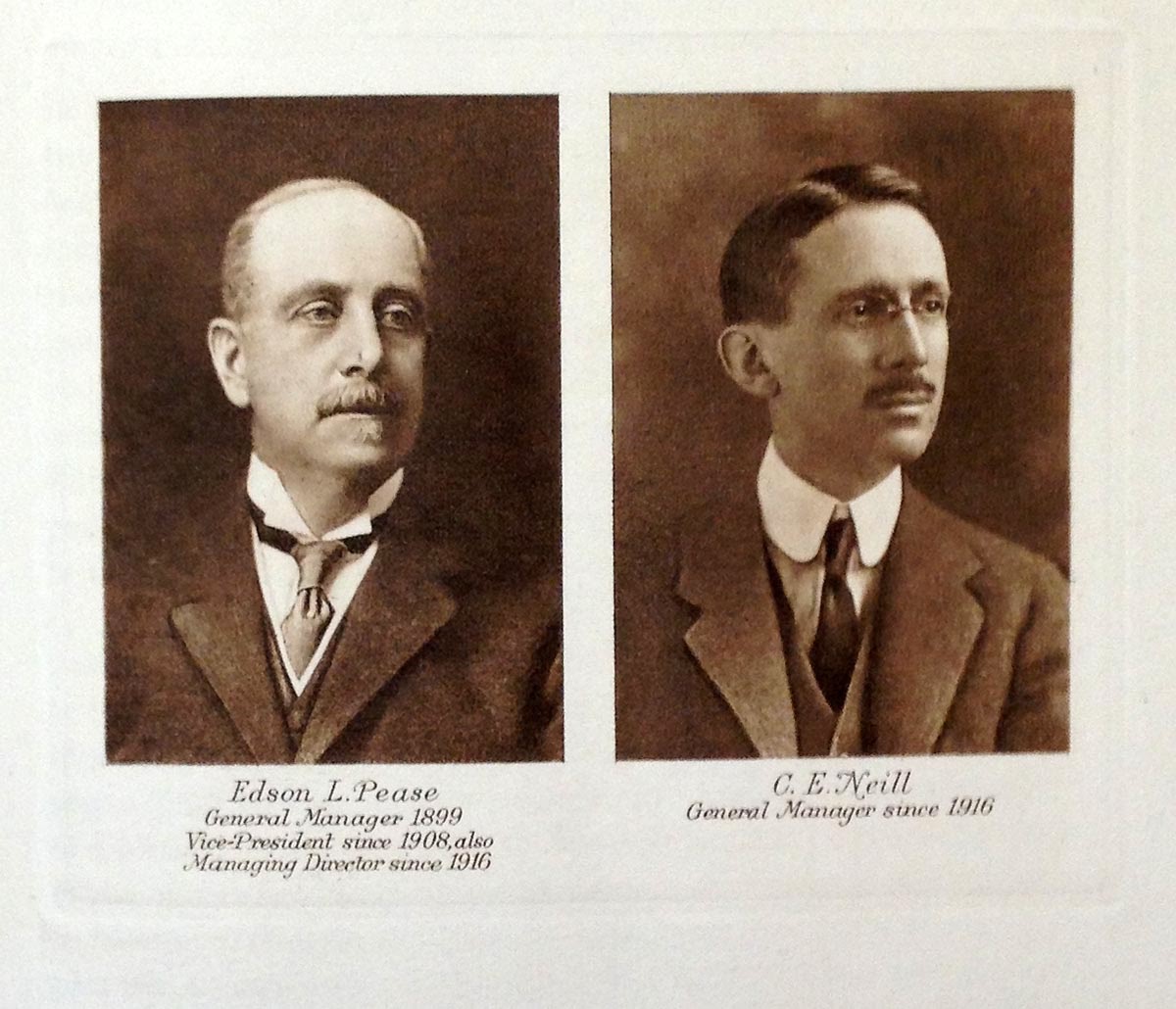 I've not seen the José watermark on any of the (admittedly few) Guarro sheets that have come my way. The book appears to be printed on two different stocks of wove, of approximately 120-150 grammage: the text on a hot pressed stock, and the intaglio on a cold pressed (i.e. textured) stock. The watermarks are identical on both. The book seems to have been printed on half-sheets (i.e. full sheets printed in quarto). On the pages that bear a mark, Guarro or José is roughly centered, reading vertically. There also was a watermark in the center of the full sheet. I couldn't find a complete mark anywhere, but the pieces include a crown, a shield, and the designation 1a. 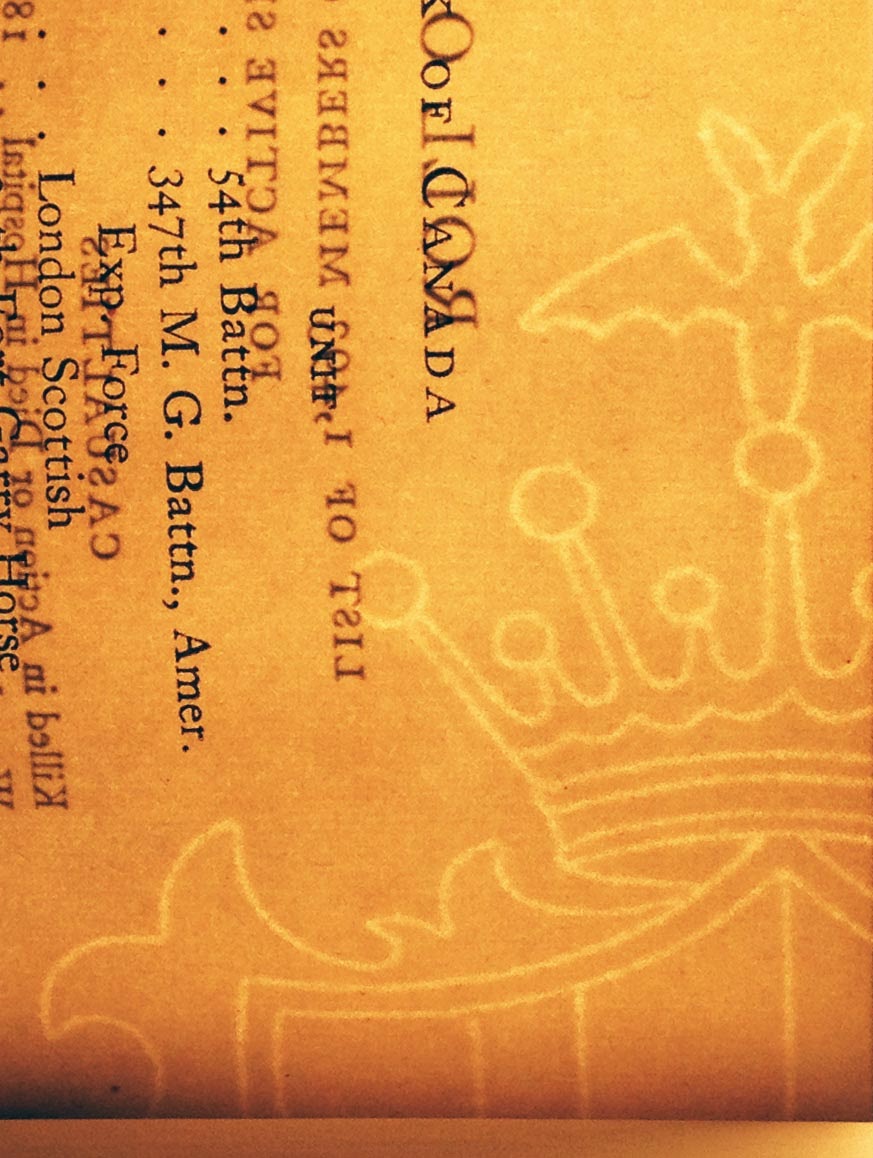 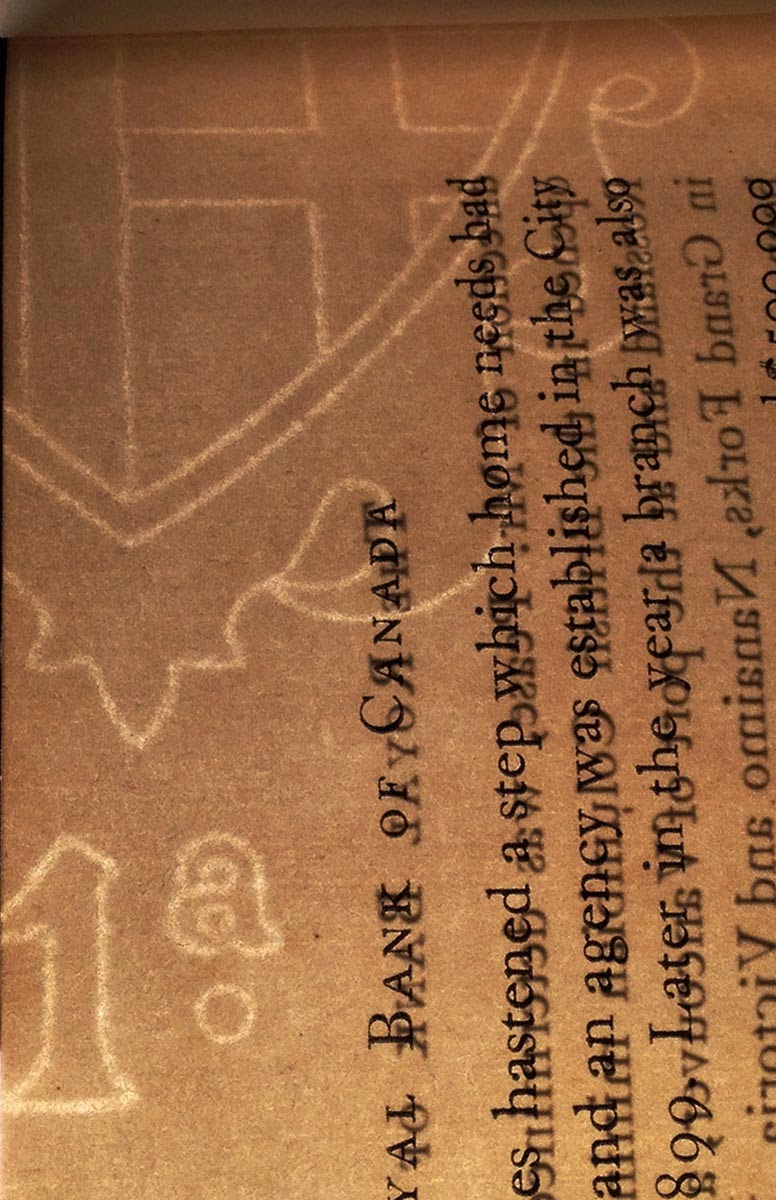 Trawling the Web for information about Guarro handmade paper, only a few reference come up. The company still exists, but in a very different form from its glory days as a maker of fine papers. No mention on their history page of a José Guarro. 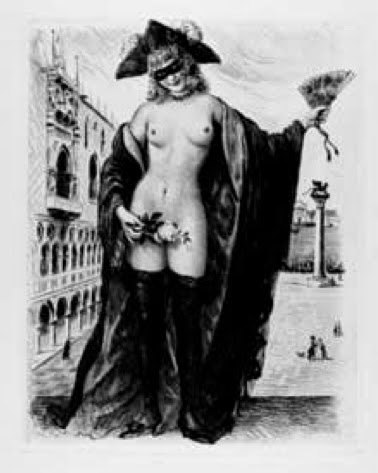 No surprise that lots of books printed in Spain (pre-Civil War) used Guarro paper. Here's a link to a fantastic 144-pg catalogue from a Barcelona auction house's 2013 catalogue: lots of images and more than a few mentions of Guarro (including the lady above). 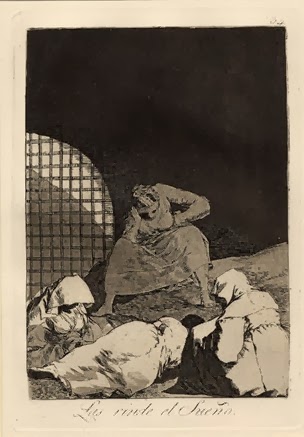 At the British Museum, an early 20th century impression of a plate ("Las reinde el sueño") from Goya's 1799 series Los Caprichos is noted to be printed on paper with the watermark. According to the description of a copy of the suite offered at auction by Sotheby's in 2008, those early 20th century impressions were from a 10th edition of the suite, and all were printed on paper with the José Guarro watermark (and a watermark portrait of Goya wearing a cap). 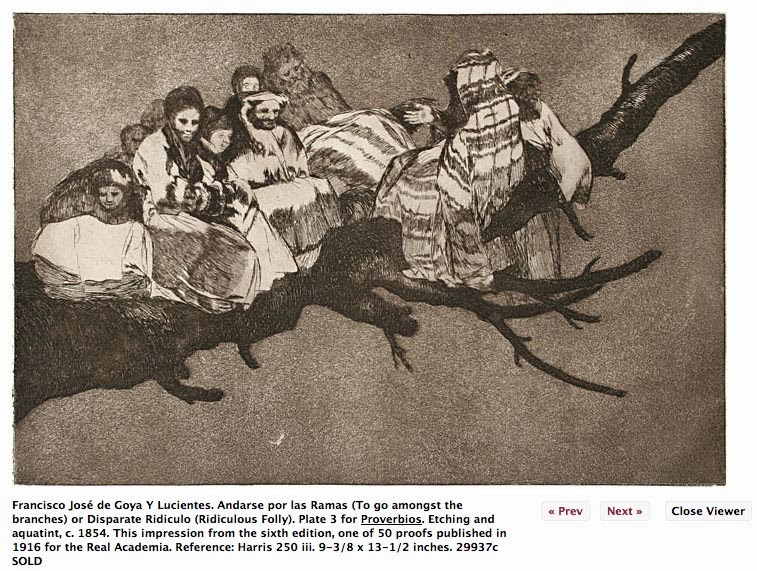 There was also published, in Madrid in 1916, an edition of Goya's Los Proverbios: 50 sets, all 18 etchings with aquatint and drypoint, on laid paper watermarked "José Guarro Catalunya." The image above is one of the plates from the edition offered by Davidson Galleries of Seattle: excellent dealer of prints from all periods, including new works by HM fave Briony Morrow-Cribbs. 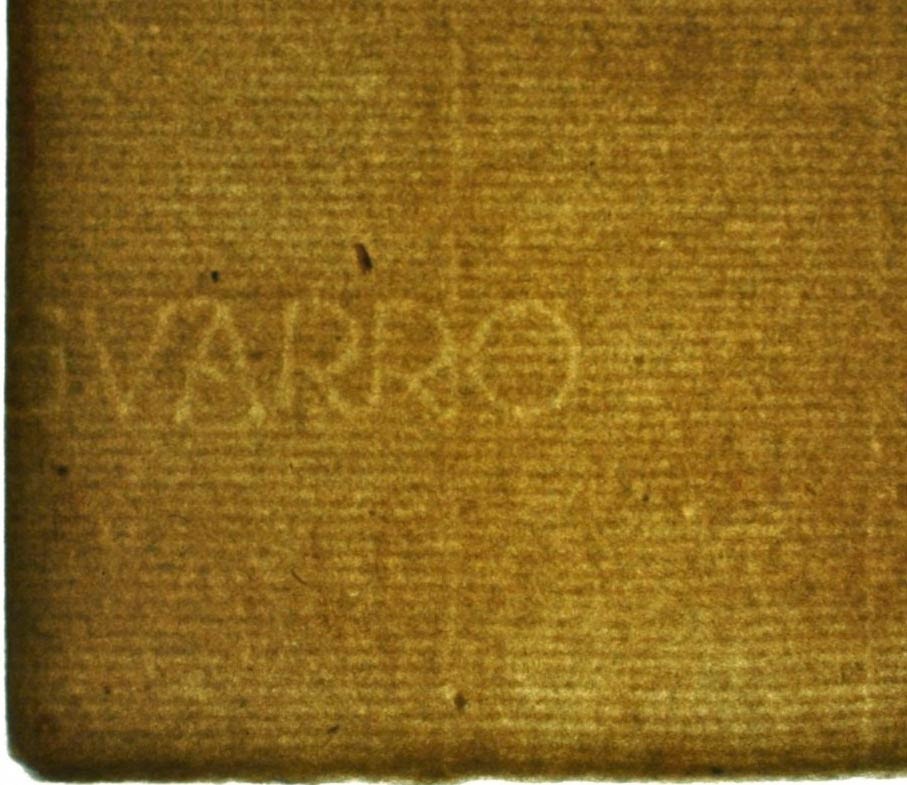 Apparently the 11th edition (1929) of Los Proverbios also used (different) laid paper with a Guarro watermark. Sample above: not as elaborate as the ones in our book.

Perhaps oddly, perhaps not, one of the handmade Guarro references that turns up has a Canadian angle: The Canadian poet Francis Sherman (1871-1926) had a few things printed on José Guarro paper. Turns out poetry was his avocation, while his vocation (or profession) was banking: he was even the Royal Bank's man in Havana in 1899. (He may have had a poem printed by Will Bradley, in 1897: see here for that story.) According to a Sherman bibliography on the Canadian Poetry site, the bank's archive still holds manuscripts and some unique copies of Sherman's books. Look, he's even listed in the book, right under our benefactor Mr Pease:

Here's a twist in that plot line: the two pieces of Shermania printed on José Guarro paper ("In The South" and the collection Canadian Calendar: XII Lyrics) were printed in Havana, in 1899 and 1901. When the bank decided to print a book to mark its diamond jubilee, might the powers have turned to their in-house poet & bibliophile to suggest how the book might be made suitably luxe? Might he have suggested they use his old printer in Havana? That seems unlikely, given the distance and the ready availability of printers in Montreal at the time. But he could have suggested the paper. If, however, Sherman the bibliophile was involved in the planning, you'd think a colophon, or some mention of the printer (printers; the letterpress & photogravures probably were done by different companies) and production would have been included.

No other information about José Guarro handmade paper, laid or wove, has bubbled up since acquiring the book. Why so much was spent on what really is an exercise in corporate vanity, who knows. One partial reason might be the recent end of the Great War: a significant portion of the book is dedicated to listing the names & regiments of employees who served. But bibliophilia was fashionable among the professional & commerce class in 1920 - think of all the books John Henry Nash talked rich patrons into commissioning - so there probably was some showing off involved. To this day, much of the value & growth in the Canadian economy comes from the financial sector. Our banks consistently report some of the highest profits for the industry internationally. The previous governor of the Bank of Canada was recruited last year to become the first foreign Governor of the Bank of England. Buried in the Royal Bank's financial report for 1919, in small type, is a hint at how this future success would be achieved: 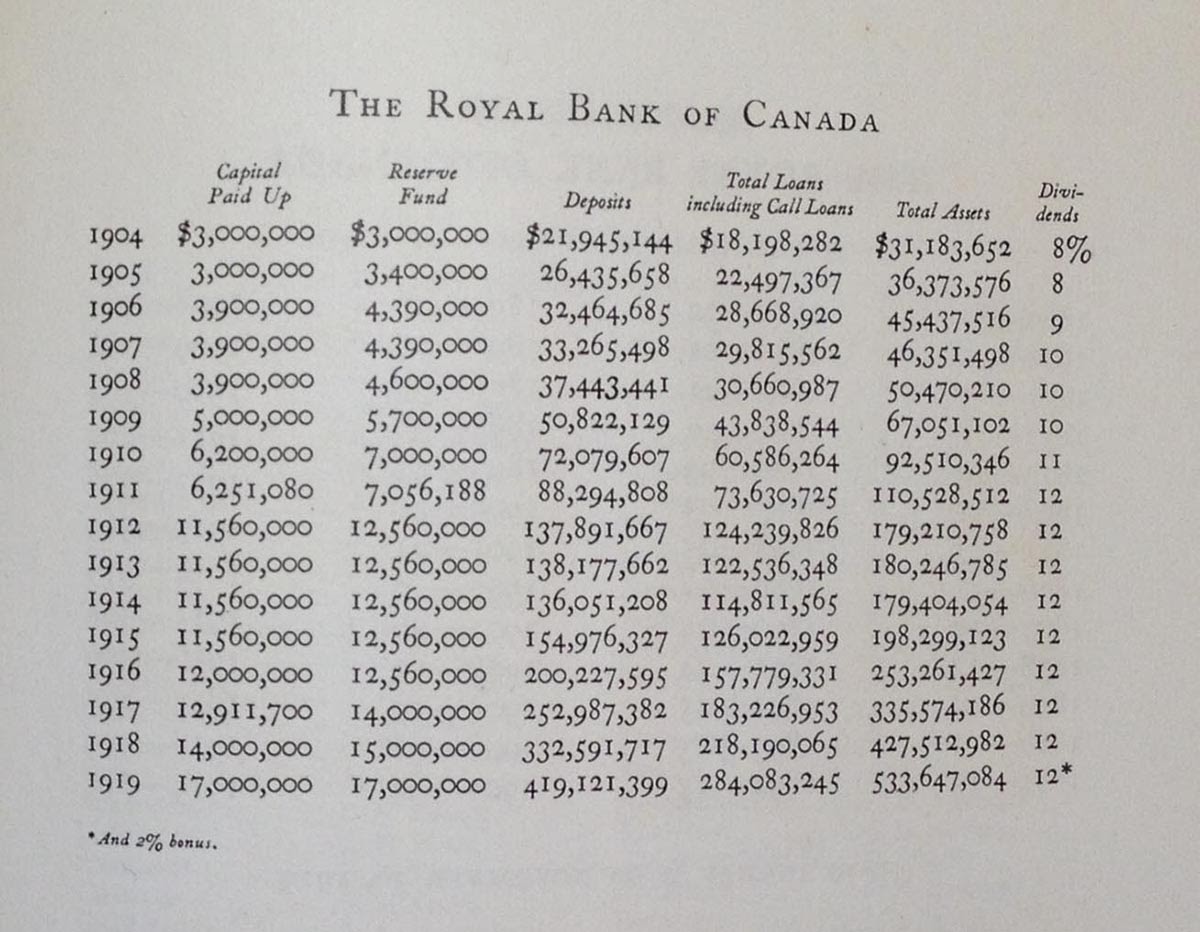