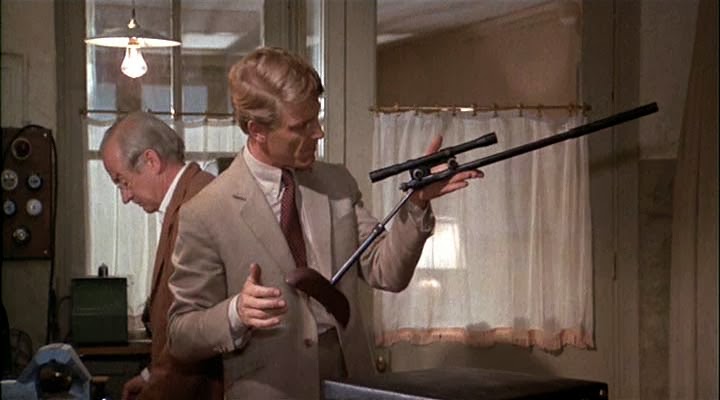 A Yahoo group of handpress nerds recently mooted the idea of fabricating "a lightweight modern basic hand press replicating a simple design" to solve the compound problem of a) finding a handpress for sale, and b) being able to afford the price. (The premise reminded me of the kool rifle Edward Fox has custom made in Day of the Jackal.) I was surprised to hear that handpresses seem even more scarce in the U.K. and Europe than in North America. Too many of them seem to end up in museums or similarly frozen in amber, treating them as objects of antiquarian curiosity rather than unique tools for innovative use by contemporary artists and printers. So, what are the options for someone who is willing to make the commitment to learn the craft of printing with a handpress? 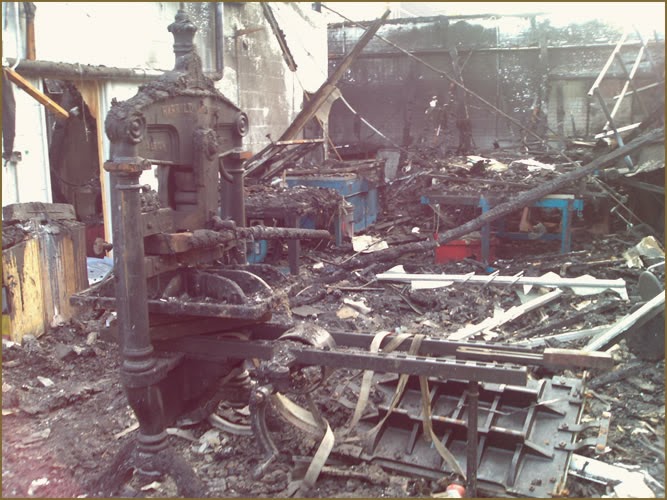 Buying an old (i.e. pre-20th century) press is the obvious approach, but supply is limited and apparently dwindling. Remember the post from last year about the handpresses in the mid-West for sale at sky high prices? The best option for sourcing any press is to find out where as many of the kind you want are located as possible, and let those people know you want one. If you're really lucky, someone will be happy to have you remove the hundreds of pounds of iron from their premises. Next best, those are the folks who will hear when something comes available.

Another source for presses can be movers who specialize in heavy items. I once had to move a C&P out of the studio, and the guys who did the work told me they had two just like it sitting in the warehouse wanting a home; someone paid to have them moved out, but never said where they should be moved to!

On the market your options are limited to eBay, Briar's classified, and used equipment dealers.

If you don't have the patience for all that sleuthing, you could buy a new press. Until last year that were two options I knew of: Steve Pratt in Utah, and Rochat in the U.K. 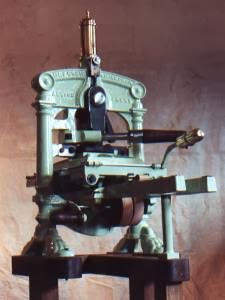 Steve's small foolscap Pratt Albion was made from castings taken from an original, with all the steel parts machined by hand. It's beautiful (tho his preferred institutional green, while perhaps historically accurate, is much uglier than black; he'd paint it whichever color you preferred). A Pratt Albion was made to order. It took four to six months, and cost about $6,000 plus shipping. That's about what you could expect to pay for a vintage Albion the same size. Given the choice, I'd rather have a Pratt, made with modern metals and tolerances.

Steve died last year. He worked with his son, who I heard was going to continue making the presses to order, but I know nothing definitive. Steve didn't have a Web site and didn't do email; he liked to talk on the phone.

(One odd thing about presses is, smaller sizes often are more sought after than bigger ones simply because they're easier to move and accommodate. A tabletop style like the Albion small foolscap probably would command a similar price to a floor-standing version.) 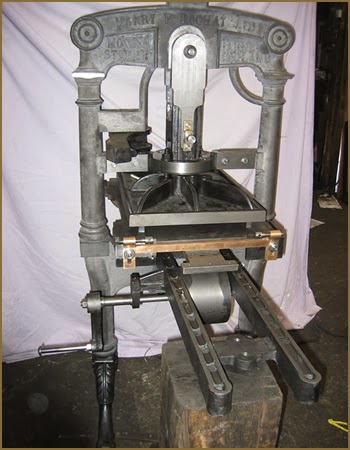 Harry F. Rochat Ltd looks to be a good source for restored presses of all type, but I've heard they are not cheap (restoration never is). Several years ago they announced a scheme to design and build Albion-style handpresses in three sizes, and posted images & details of the program on their site. The first (a large foolscap size) was completed at the end of 2010, and discussed in this article from 2011. This page on the Rochat site has details & the price ($10,000+); bizarrely, they offer the option of buying it without the tympan, frisket etc etc, which seems like buying a car without a dashboard and instrumentation. If you're using a handpress without the tympan and frisket, you should just use an etching press. Most old presses that are rescued from obscurity are missing the tympan & frisket, and so follows a complicated search to find someone who can make a decent replacement. It's almost like a dust jacket on a modern first: lose the jacket and suddenly it's just another hardcover.

So far we haven't found a contemporary option for would-be handpress printers that is lightweight and affordable. There's a reason presses are heavy: it takes a lot of metal to make a frame strong enough to provide sufficient pressure for printing. A handpress looks simple enough from a distance, but it also represents a few hundred years of development. 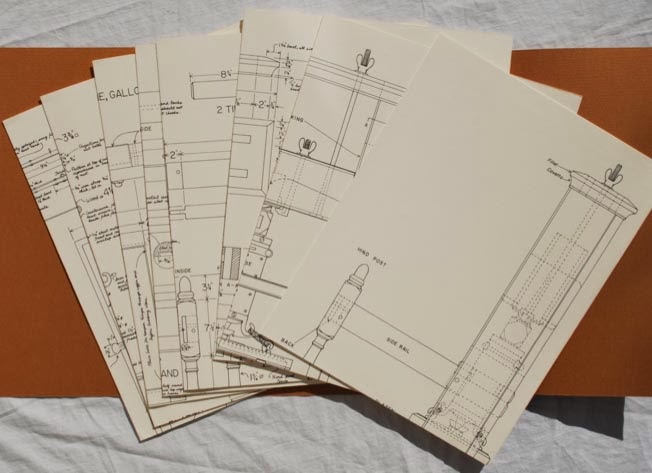 A common press might be an easier option for DIYers. In 1978 David Godine published The Common Press: Being a Record, Description & Delineation of the Early Eighteenth-Century Handpress in the Smithsonian Institution, with a History & Documentation of the Press by Elizabeth Harris & Clinton Sisson, with detailed plans. Copies are still easily found. However, as this thread of comments over at Briar points out, getting the appropriate materials will take some sourcing. And in the end you've still only got a common press, which isn't as strong or versatile as the (iron) handpress. 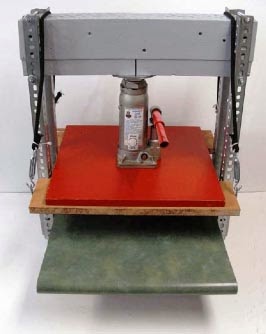 Here's one stripped-down approach to building a press: Charles Morgan's Bottle Jack Press. It's well thought out & looks functional if all you're printing is blocks, but I wouldn't want to have to print type (much less pages of type) on it. Morgan is a printmaker based in Victoria, B.C. 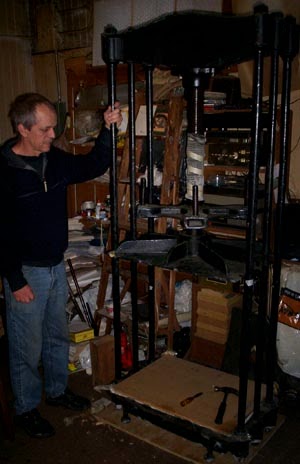 When I first knew Reg Lissel - 20 years ago? - he was using a "press" made from 4-inch posts, plywood platens, and a car jack to press the paper he was making. Then we got the Big Gun, above. Morgan's plan isn't much different than a book or copy press*, so maybe that's the easiest option for people who want to print blocks. You don't need one like the Big Gun; a foolscap size copy press would be perfect. It's good enough for David Esslemont's last book, and that ain't bad. 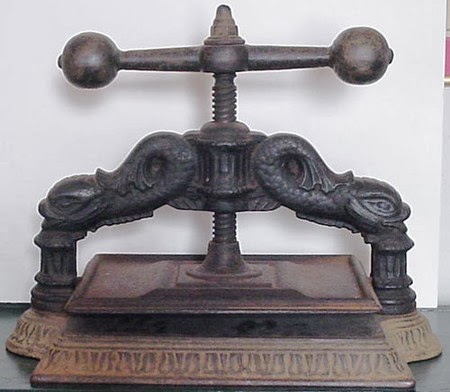 * A copy press (above) was used for copying documents; a book press for binding (pressing) books. The easiest way to tell the difference is how tall the cheeks are: the platen of a copy press had to be raised only enough to slip a few sheets in; a book press (below) must have enough clearance to hold several books at once. 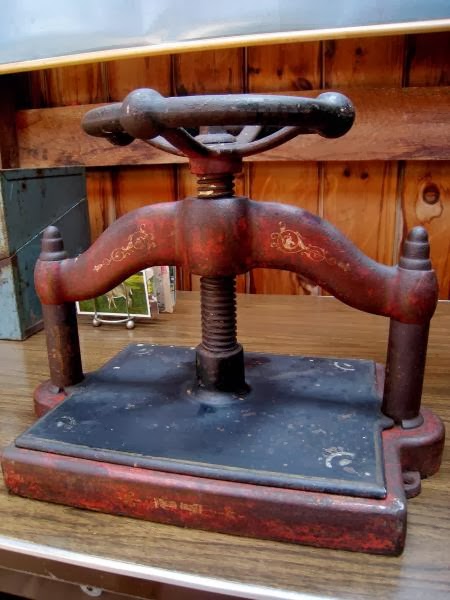 Whatever kind of press you have access to, the submission deadline for the next BIMPE mini-print exhibition approaches, so get printing. Details here. I bought a couple of prints by first-prize winner Tomiyuki Sakuta last time; very kool. 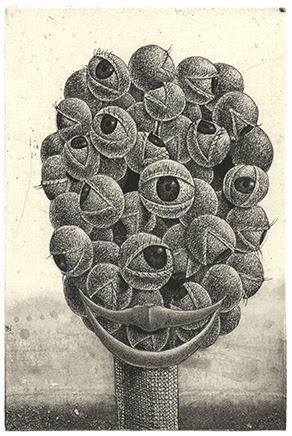 Here's another new article about Harold, this one a bit more insightful than The Guardian's. 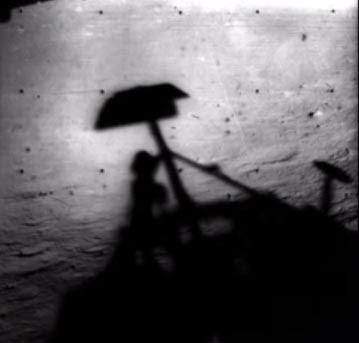