A Cabinet, and Crash 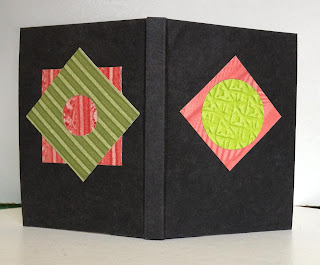 Recently mentioned we've been doing some binding projects that have been hanging around the studio for too long. One was a spare copy of the miniature version of The WunderCabinet, a set of sheets Barbara had used for tests and trials before coloring the six (or whatever the number was) of copies we actually issued. Rather than boards, because it's small and fits nicely in the hand, we went for a limp case, using some leftover back abaca vellum paper that Reg made years ago. The block was sewn on two vellum slips, which were attached to think boards, which "float" within the case. The outer edges of the pastedowns were glued to the case's fold-ins. Some of the scraps of Claudia's papers left over from our Will Rueter broadside were laid on to the case. Barbara will add a hand-written spine label.

So that's a book going out. One came in last week, a copy of Crash from Morris Cox's Gogmagog Press (1963). Cox's books have long been noted for his innovation in design and printing techniques, as integral visual components to his own poetry. Always a little too innovative and technically unrefined for HM's taste, but Crash caught our eye because it specifically is an exploration of (eight) different printmaking techniques. This kind of thing is right up our alley. Plus, we found a cheap copy. 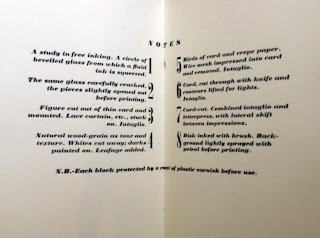 The eight prints, each a spread, are linked with one of Cox's poems. Forget whether the prints are to our taste or not, his talent for experimentation (and with the most basic of materials) cannot be denied. Here's his intro to the book: 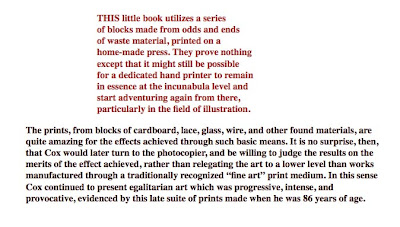 For some more info about Cox: a long article about his career (the selection above is from another article about Cox, also in Flash Point); and some of his paintings. There also is a book about his Gogmagog adventures by David Chambers.