The Book is Dead, Long Live the Book

Every Sunday the Canadian (re)Broadcasting Corporation, a.k.a. the Corpse, has a two-hour call in show based around some topic. Yesterday's topic, as many people called HM HQ to tell us, was about the future of the book. That's exactly how slow world events had become. How could anyone who does what we do honestly doubt for the book's future? If you really can't stop yourself, here's the link. While working on a few binding projects (pix later this week), we instead listened to a provocative interview on WTF with publisher Adam Parfrey.

The host of the CBC call-in actually is an interesting person with a broad and deep mind. He recently rejected efforts by a fellow Corpse interviewer to have him name particular high spots of "Canadian" literature, pointing out that country of origin is not a sound basis for recommending much of anything. (Milan Kundera wrote a great article about this for The New Yorker a few years ago.) Would that our host's colleagues and fans stopped to give this some thought, because thanks in large part to the CBC and its fans, "Canadian" has become something of a qualifying adjective that tempers rather than sharpens one's anticipation of what follows. 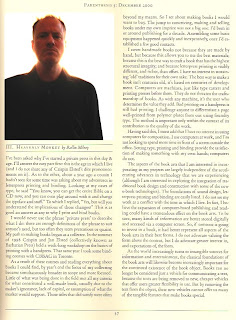 But about the future of the book: really? When we haven't been able to avoid such discussions in recent years, they often seem to settle on some variation of books will persist, perhaps in fewer number, but those that survive will have to sufficiently respect & celebrate the form's traditions, crafts, and materials to justify their physical existence. That's a good thing. It's what we've been saying at HM since the beginning: above & below is a short piece on the topic that appeared in an early issue of Parenthesis, the FPBA's journal. Even then we found it a dull topic. 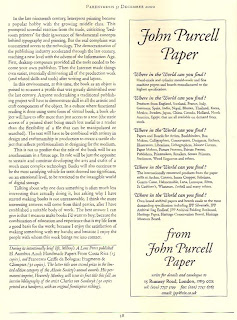 Digital publishing and reading makes practical sense for many of the things we read. Digital's potential to go beyond mere simulation of a printed text page hasn't really even been scratched yet. Digital publishing also makes us think harder about why any given book should be published in a material form; and if so, that form had better justify its existence in the physical world through design, materials and craftsmanship (for which a colleague recently reported, with appropriate derision, someone attempted to coin the phrase "the materiality of the book"). Otherwise pixels will suffice.