The Types of Roy A. Squires' Private Press 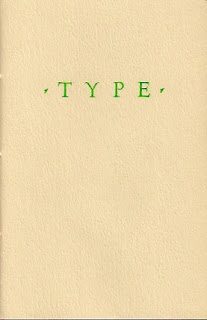 This'll have to be quick. We have serious work to do around here. The type specimen books of Roy Squires:

Roy was a bookseller based in southern California, operating from the mid-'60s up to his death in 1987. Growing up he'd been active in writing for & publishing an amateur fanzine dedicated to science fiction. That became his primary focus as a bookseller, and probably also was the spark for what became an interest in "private press" printing.

Between 1962 and 1987 Roy published 38 titles, all but one being single-signature chapbooks. He was the executor of the estate of the California poet Clark Ashton Smith, and so he published a number of Smith's poems, some for the first time. (Early in his career Smith was considered on of the bright new lights in California's literary community, and his second collection was published by the Book Club of California, in 1918, printed by Taylor & Taylor. But that early momentum faltered for whatever reason, and he ended up making his living during the Depression writing "weird" fiction for the pulps. It's this body of work for which he's still & best known today. His works printed by Squires are among the most sought after.) 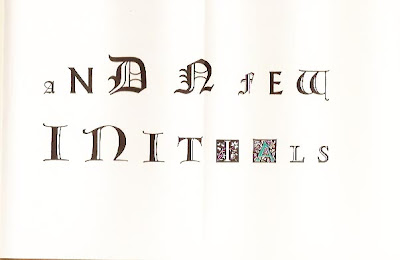 All of Roy's books were set and printed by him; we've never been able to determine what kind of press he had, although one of the colophon's mentioned a C&P platen. Like many hobbyist/private press printers, Roy's first passion was for types (although unlike many of this breed, he had an appreciation for paper). 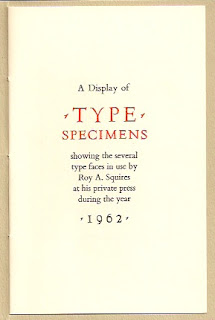 Roy's first publication, in 1962, was a long collection of Smith's poems, started while the poet was alive but not completed until after his death. The realization of how much work is involved in setting, printing & dissing 60 pages probably is what led him to focus on smaller, single-signature projects for thereon. That was also the year he issued his first type specimen book: 8 pages (approx. 3.5 x 6 inches) in a printed wrap, displaying Bembo, Centaur, Arrighi and Cable in text sizes, plus some display faces. 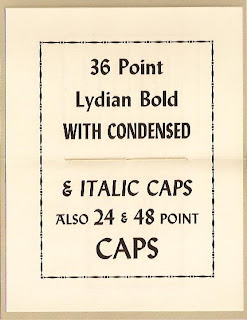 A handwritten note from Roy in our copy (which we were lucky to find: though not stated in the book, only 45 copies were issued,) gives some insight to his interest in type:

"I'd like to do this again - if only it wouldn't take so much more time than it'd be worth to me. Offhand, I can think of these additions: 24 pt Bembo, Narrow Bembo italic, more sizes of Centaur & Arrighi, Palatino, Post Roman Light, Joanna (acquired last week), Michelangelo & others in titling sizes, American Uncial, & of course more border types. And I have eliminated the Cable series. I need many more types!" 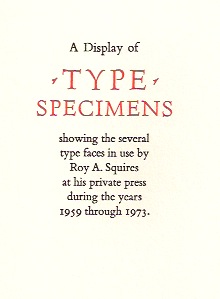 Roy did end up doing it again, in 1977, with his second specimen book (approx. 4 x 5.5 inches, 12 pp.). With an edition of 300 copies this time, it's not exactly scarce, but it's still uncommon. It shows all the types mentioned in his note, plus Goudy Thirty. You have to love a guy who leaves his type standing for 15 years. Can't be sure, but we think the wrap is some of Henry Morris's roller-printed paste paper. Timing's right, and Roy did use some of Morris's decorated paper for one project around this time. 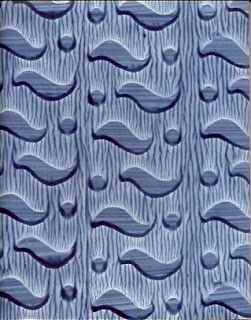 We've long been interested in writing some kind of article about Roy's work as a private press printer and publisher. He was never really welcomed into the California "fine press" community, perhaps due to some suspicion over his choice of authors and genre. But he was an important publisher, and a dedicated printer. Unfortunately almost everyone who knew and worked with Roy is now gone. We tried several times to get in touch with Ray Bradbury (one of Roy's frequent collaborators), without luck. Roy was a great correspondent, and often included lengthy letters about his printing to subscribers. We're focusing on gathering all of these that we can find, so if anyone out there has any, please get in touch. 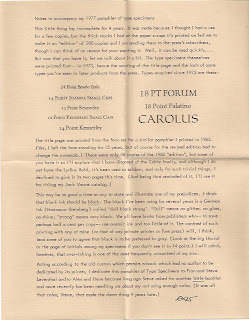 Finally, bringing things full circle, it's interesting to note that one of Roy's contemporary influences in the realms of typography and printing was Leonard Bahr (a.k.a. the Adagio Press). Roy featured Bahr's publications (also primarily chapbooks) in his catalogues, and at least once drew customers' particular attention to copies of Bahr's Typographia 1 and 2. These, as frequent readers of this blog may recall, were all that Bahr ever managed to publish from what he initially conceived as a longer work about the contemporary private press; and it was galleys of this never-completed work around which Will Rueter developed his latest publication, Pressing Matters.