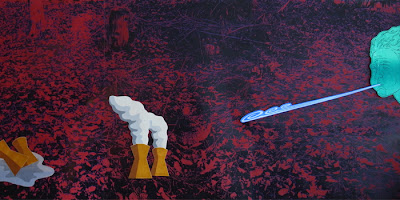 Lots of bookish exhibitions happening. First, HM friend & longtime collaborator Shinsuke Minegishi is having his first solo show, at the Burnaby Art Gallery. It covers the full spectrum of his printmaking, with the books he's done with HM featured prominently. The gallery is publishing a catalogue for the show; we'll have some details about that after the opening (a week today: Thursday 30 May). Shin will also be giving a talk on the following Saturday afternoon. We'll try to get a summary or recording of that available. 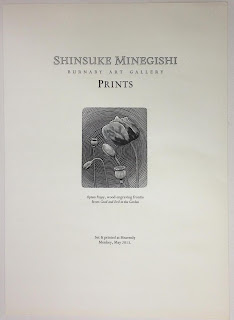 To help mark & celebrate the show, we printed a broadside (approx. 9 x 12 inches) using the frontis engraving Shin made for Barbara Hodgson's Good & Evil in the Garden (published 10 years ago!). We managed to yield about 20 or 25 decent copies, all of which are being given to Shin to distribute as he desires. Requests for a copy will be passed along for consideration. 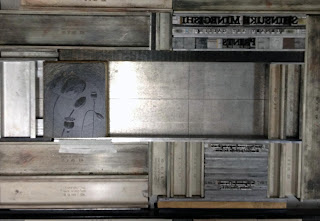 Being pretty lazy, we set the press up to print the text and the block at the same time. Inking the type & block all together wouldn't work: the block needs more ink than the type, plus that mass of stuff down the middle throws everything off balance. So we built a forme that, when locked up, allowed just enough play to slide the block away from the type, so it could be inked separately. 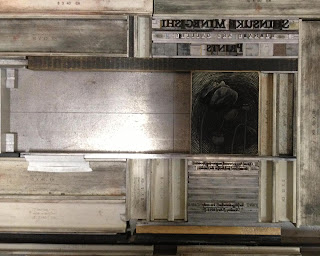 Meanwhile, over in the middle of the country, the Thomas Fisher Rare Book Library has organized an exhibition titled A Death Greatly Exaggerated: Canada's Thriving Small & Fine Press. Kind of an apples & oranges pairing (pearing?) in that title, but it certainly will provide a broad spectrum of books. HM's in it, but don't know exactly which titles.

The image above was grabbed from the library's site. The file name includes "rueter_tunnel." Don't think we've ever seen one of his tunnel books. The exhibition was curated by John Shoesmith, Outreach Librarian. There's a catalogue.