Another Lowe at HM 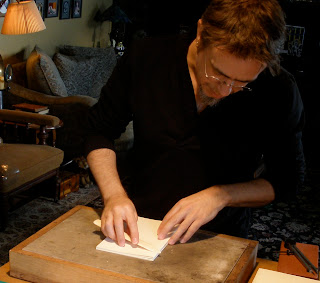 Professional musician, avocational binder and chronic bibliomaniac Keith Lowe was at HM the other day, sewing up the edition of Harold Budd's 4. It was through Keith that we were first introduced to Harold, back in 2008, and so it was appropriate (and always fun) to have him involved in this latest project. 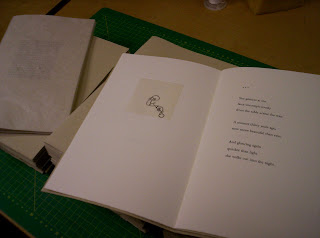 As the first volume in what will be the occasional, ongoing Artist Pamphlet Series, 4 will serve as the format model  for future collaborators: a single signature, two sheets (8 pages). Thus, sewing the edition of 50 copies (plus 10 A.P.) was not terribly onerous for Keith, which is good because his window of availability between tours was tight. He'd just come back from several weeks playing U.S. gigs (including a Jimmy Fallon show appearance) with Stone Gossard's band Brad, and he now leaves for a few weeks touring Holland with Jim Byrnes, Steve Dawson, and The Sojourners.

While working at the studio, Keith treated us to several tracks he recorded with Harold at a session in Seattle last January (release plans still TBD), and tracks from a session of Keith alone playing piano, recorded a few years ago. Fantastic stuff. Music for binders. 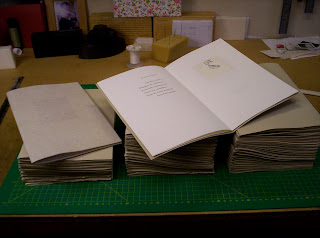