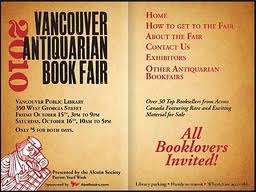 The first book fair held in Vancouver for about a quarter century seems to have been a success. A couple of exhibitors told HM that sales were slow, but when don't booksellers say that? (Although the summer of 2010 does seem to have marked a new low for booksellers across the board.) A collection of photos from the fair can be seen on the Alcuin Society's Flickr page. All of the exhibitors were Canadian (the sales tax issue making participation by foreign dealers too much hassle). Traffic was neither crushing nor sparse, but appeared constant on the Friday afternoon and Saturday. The show leaned heavily toward travel/exploration, modern firsts and true antiquarian items; there was essentially no contemporary fine press material on offer. 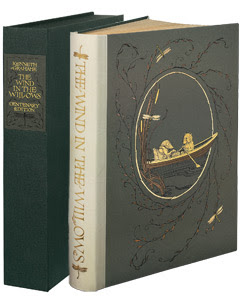 Charles van Sandwyk and his partner in Savuti Press, Waisiki Doughty were there (as part of Joyce William's booth) with a large selection of Charles' books and prints, including a copy of the out-of-print deluxe issue of Wind in the Willows, issued by the Folio Society in 2008. 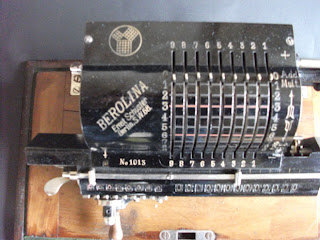 Steve Lunsford had just a few items on offer, each one unique or essentially so, such as a signed, presentation large-paper copy of On the Economy of Machinery and Manufactures by the father of the modern computer, Charles Babbage. It was accompanied by a hand-cranked computer of German manufacture c.1900, a thing of Art Deco beauty (and function, above). 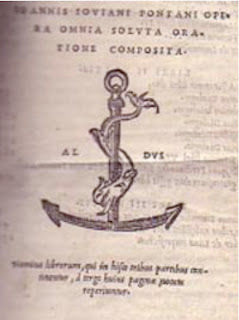 John King had a copy of the Aldine 1518 edition of Opera Omnia Soluta Oratione Composita in a period binding by Courtland Benson (who was responsible for rebinding and restoring the collection of Aldines presented to Simon Fraser University in the 1990s). The book was printed in the Aldine italic, and concluded with a simple colophon over which each of the sorts in the font (i.e. including the ligatures) were simply displayed on a few lines.

A visiting bookseller had on hand a copy of Humphry Ditton's 1712 edition of A Treatise of Perspective  Demonstrative and Practical, extensively illustrated. This was of interest because of HM's upcoming project with sculptor Geoffrey Smedley, which will draw from a long essay exploring aspects of portraying, or representing, perspective. The Treatise on offer had recently been rebound in a manner that may not have been entirely successful from a historical perspective, but was nonetheless a tempting book. 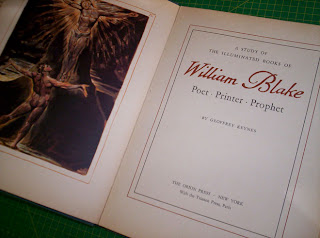 Additions to HM's library were limited to a single, inexpensive item: the 1964 edition of Wm Blake - Poet/Printer/Prophet, purchased for details included in the introductory essay about Blake's printing methods. Inexplicably, this otherwise well-produced book basically is perfect bound, with the text printed on folios that are not sewn, but simply glued up (and thus, popping loose). But it was cheap, and an interesting companion to one of the jewels in HM's collection, the Gehenna Press edition of Poe's essay Anastatic Printing. 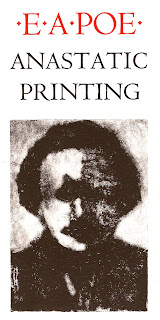 Don't know what, if any plans the Alcuin mob has to repeat the fair, but hopefully this latest incarnation was sufficiently successful to justify a second. Perhaps they will alternate years with the Alcuin Wayzgoose. Be interesting to hear how the Toronto fair compares in a week's time. HM hopes to have one or two agents file reports.