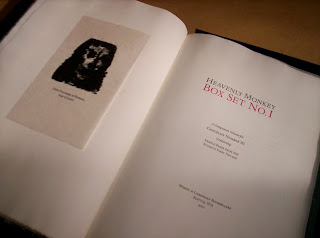 In addition to an advance copy of Harold Budd's 4, the recent Seattle book fair marked the release of a second HM-related title. HM Box Set No. 1, initiated & published by Wessel & Lieberman Booksellers, is a two-volume record of work spanning the studio's first decade. Issued in an edition of just five sets (only 3 for sale), the set includes a copy of Checklist Number 3 (a.k.a. HM=X), specially bound in a marbled paper case. Unlike the 26-copy edition issued y HM, these 5 copies do not include the section of six sample pages at the back. Instead, each set includes a second volume containing 25 samples. The sample volumes include a specially printed title page and brief introduction. The samples are hinged or mounted (as appropriate) on consecutive rectos, with the book's title printed on the facing verso, and in some cases a brief comment about the project or sample. These special sample volumes also include a frontis ("Our Founder & Patron") originally planned for inclusion in the checklist, but ultimately not used.

The books are sewn on tapes, with boards attached, and put into limp cases made from (different from complementing) hand-marbled papers. The paper used throughout is vintage Guarro laid, printed damp; the sample volume uses alternating gray and pale green sheets. Each set is housed in a clamshell box covered in blue silk. HM Box Set No. 1 is available exclusively from Wessel & Lieberman. 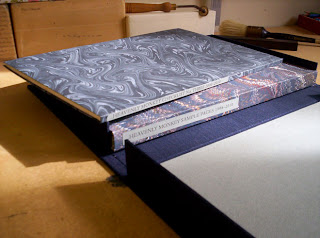 The idea for HM Box Set 1 grew from a similar, less ambitious project undertaken during the Olympic shut-down of our city this past winter, when HM produced an enjoyably diverting precursor to the checklist: a boxed collection of ephemeral pieces spanning HM's first decade, issued by London booksellers Collinge & Clark. The idea was sparked last year, when Oliver Clark asked if a few lots of ephemera could be assembled to interest collectors unfamiliar with HM's work. The result, titled Twelve from Ten, is a collection of prospectuses, pamphlets and broadsides from a dozen different projects (including the first appearance of the name Heavenly Monkey). The collection is detailed in a contents sheet printed on Reg Lissel's handmade HM Text paper, with a press-numbered colophon. The whole lot is wrapped in a printed chemise, and kept in a clamshell box with an inlaid title label on the front. Number 1 stayed with us, numbers 2-5 where shipped off to Messers Collinge & Clark in March. Contact them if interested in more details. As far as we know, no copies have travelled back west across the Atlantic, hence Wessel & Lieberman's interest in publishing something similar. 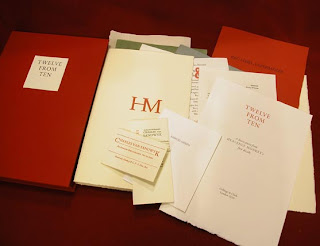