Our Second Attempt at a Broadside 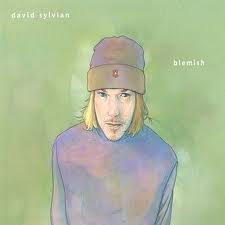 After too long a delay in production (HM's fault, no one else's), we are pleased to announce that HM will be publishing a broadside featuring a text titled "Uncommon Dieties" by David Sylvian, and an original drawing titled "The Botanist"  by Atsushi Fukui (whose work has been featured on David's albums Blemish and Manafon, both released by his label samadhisound). This project was sparked thanks to Harold Budd, who mentioned HM's interest in publishing something to David. The text - sort of a free-verse rumination on the artist's work, influences, and influence - was originally written as an introduction for a catalogue to be published in conjunction with a show of Fukui's work, but that publication did not materialize. At David's request, Fukui created a large drawing (based on the original painting, also titled "The Botanist," shown below) around which the text will be arranged on the broadside, and several incidental drawings of mushrooms. 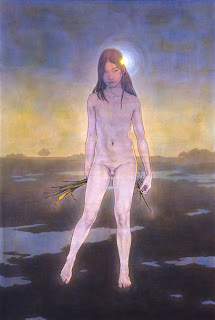 This will be just the second proper broadside ever attempted at HM (the first being the Tabula Smaragdina Hermetis [The Emerald Tablet of Herme] for Ouroboros Press some years ago). The sheet will measure 20 inches wide, 13 inches tall. The text is set in Dante and Dante Titling, and will be printed at HM in two colors on dampened Arches paper with the Washington press. The edition will be just 30 copies, signed by the author and artist. For all intents and purposes, this project will be hors de commerce: the edition will be shared equally among the author, artist and publisher. A few copies from HM's share will be offered to our regular customers.

Printing will be completed before the end of October, but then the sheets must circumnavigate the globe, to be signed by David and Fukui, so it will be some months before we have finished copies in hand. But we look forward to showing it off when the time comes. Meanwhile, check out some of the very cool new releases, like Sleepwalkers, from David's label.