A Printing of Poetry That's Odd 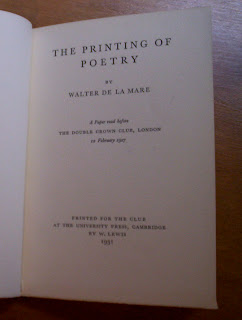 An unusual item recently added to HM's collection of books about printing: Walter de la Mare's The Printing of Poetry, a paper read before the Double Crown Club, London 12 February 1927. Printed for the Club at the University Press, Cambridge by W. Lewis 1931. Issued in an edition of 90 numbered copies. It's a simple 16mo in size, 34 pages, cased in blue cloth adorned with just a leather spine label stamped in gold. The printing and paper are nothing special.

De la Mare (1873-1956) was an English poet and novelist who probably is best remembered today for his supernatural fiction. The first half of the text is given over to much false modesty and bloviating at the feet of his audience, before arriving at his central point:

"The very glimpse of verse, then, on the printed page extorts a definite response in the mind...If, however, we detest the very word poetry, the more a book looks like a book that contains it the more odious will that book appear to be. If we delight in poetry, the more abject will be our disappointment on finding that the verse within is merely rouge, patch and powder."

Here's a line we liked, the author quoting an (un-named) member of the club: "Poets are best bound hand and foot."

It's only in the last seven pages that he gets down to the topic at hand in real terms, and then only by offering a paragraph each to such topics as type, setting, layout etc. (He skips right over printing.) And here's an interesting little bit of disingenuity:

Disingenuous for two reasons: one suspects that many of the members of the Club he was addressing had at least a few limited or expensive editions on their shelves; but more to the point, those editions are exactly the manner in which one is most likely to encounter de la Mare today! Lots of limp vellum and gilt edges out there with his name stamped on the spine.

Despite its lack of real insight to the design concerns of printing poetry, and general oddness, a fun little addition to HM's library.