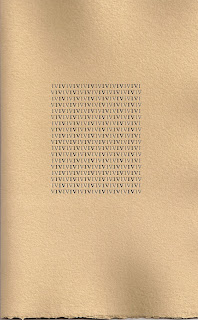 HM has just completed the first title in what will be an occasional, ongoing series of pamphlets published in collaboration with artists from outside the book arts community. 4 is a collection of four new poems by musician and composer Harold Budd, accompanied by four new etchings. These etchings, which continue to explore his enigmatic "arabesque" designs previously featured in the CARNIVAL suite (and other places), are named after avant garde film directors: Akerman, Cocteau, Jarman and Anger. 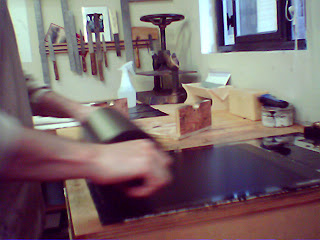 Each title in the series will be limited to our usual 50 copies, within the first ten being offered for sale to patrons, and the remaining copies being shared between HM and the artist, strictly for private distribution. The poems were set in printed and printed on dampened Arches Wove. The Patron copies of 4 feature all four of Harold's etchings, with the frontis etching being initialed by him. The remaining hors de commerce copies feature just one of the etchings, as a frontis (although which of the four etchings varies from copy to copy). The entire edition is sewn into a printed handmade paper wrap; the Patron copies are further covered in a transparent tissue chemise.

Harold remains busy in his real life as a musician. News of some of his adventures in recording can be seen on Robin Guthrie's site. We continue to look forward to a formal recording by Harold and HM collaborator Keith Lowe (currently on tour with Stone Gossard's band Brad).