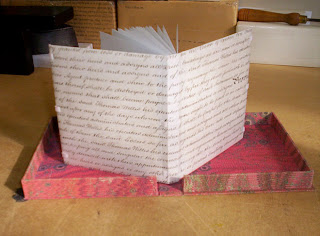 A new creation from HM collaborator & friend, Claudia Cohen. Similar in spirit to her Bookbinding Ephemera and Chasing Paper, An Edible Alphabet combines her love for letterforms, fanciful page compositions, and binding structures that convey intimacy when held. Each page reproduces from stencils a letter in three alphabets, surrounded by the names of foods starting with that letter. These words are taken from Claudia's large collection of early 20th-century rubber stamps, used in restaurants to create the daily menu. Some words are also written in her own elegant cursive. The paper used in a wafer-thin vintage laid, French folded and sewn long-stitch on to a vellum structure with three slips, and laced into an outer case made from pieces of 18th- and 19th-century parchment documents. The edition is 30 copies, priced at $500. Copies are available from some HM booksellers, and from Claudia directly (ccbookbinder [at] msn.com). 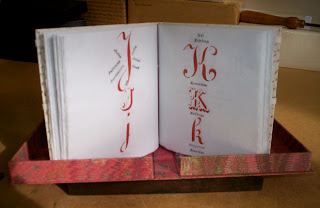