A Birthday Bouquet for Bob Reid

This is Robert R. Reid's birthday. How fitting that it coincides with the opening of a new show of watercolors by his one-time partner in printing, Takao Tanabe. We'll be enjoying a dinner, and then attending the opening tout en masse. Although the last thing Bob needs is another book in his apartment, HM found one that was too appropriate for marking the occasion (& sufficiently diminutive) to pass up: Printers' Flowers - Whimsicalities from the Windsor Press.

The book is a slim 16mo (18 pp.) published in an edition of 150 copies in 1933. It is quarter bound in cloth with a patterned paper printed in several colors. Part of the great fine press community that was so intensely active in San Francisco during the early 20th century, the Windsor Press was the imprint of two Australian brothers, James and Cecil Johnson. They seem to have started work around the mid-1920s. In 1929 they became one of the first "second generation" printers (the Grabhorns, John Nash and Taylor & Taylor being the first) tapped to print one of Book Club of California's limited editions (Witter Bynner’s The Persistence of Poetry). The Johnsons' imprint continued to appear on BCC books and ephemera up to 1943. Lawton Kennedy worked for the Johnsons, at least during 1929, when he is credited as pressman on Nocturne in St. Gauden's.

The little volume at hand was written by brother James, and set in Nicolas Cochin, although a number of other types makes appearances throughout. It essentially is a brief history of printer's flowers, and how their style and use have reflected typographic trends through the years. The writing is as florid as the title, and often interferes with whatever point the author is making. But the book is redeemed by its playfulness of design and color. A visual delight to mark the birthday of a man whose love for type and typography has spanned his entire nine decades. Happy birthday Bob! 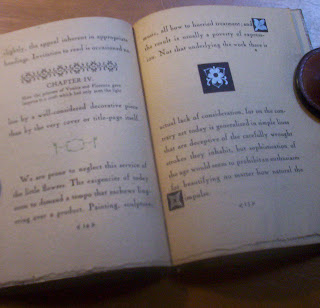