Scans of the entire contents of the Francesco Griffo - Fragments and Glimpses, published in 1999 by HM's precursor imprint, have been posted on Simon Fraser University's special collections site. We'd forgotten giving permission for this, & discovered its presence only when hunting around for samples of Tak Tanabe's printing (see the last post). We're also a little confused about the identity of the felon shown in the photo beside the HM heading, and what his relationship might be to us. Perhaps he is one of the people who helped move the Washington into the HM studio (an event that, oddly, antedates the Griffo project by about two years). 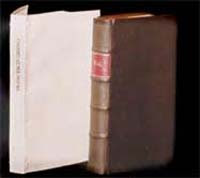 Griffo was one funky project, begun in the earliest days of our exploits with printing: set in 8-pt type (Bembo) and printed on a Kelsey 5 x 8 tabletop. And to make things really interesting, the paper (Lana Wove) was dampened (truthfully, it often was wet), which further funkified progress. But beautiful bindings by Natasha Herman and Helene Francoeur. Its many setting & printing flaws aside, this remains - as far as we know - the only book publication dedicated to the life and work of Aldus' typecutter. 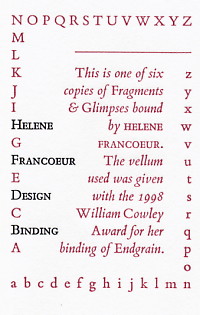