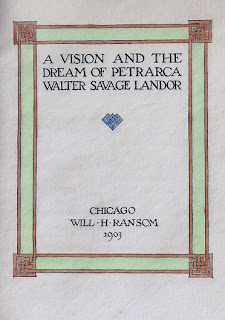 Stumbled across a sublime item at the Seattle Book Fair. Despite its diminutive size, it stood out from everything else in a glass case. The bookseller, a friend & expert scout, provides the following bibliographic description:

A Vision and the Dream of Petrarca, by Walter Savage Landor.
Will H. Ransom, Chicago, 1903. 7" x 5". 22pp. Gathered and sewn signatures. With a note by Thomas Wood Stevens. Handcolored title decorations and opening initials. Faint soiling to outer blanks, else near fine condition. First edition in this format; Ransom's third imprint. Ransom's first two books appeared under the imprint of the Handcraft Shop from Snohomish, Washington. This work appeared shortly after his move from the northwest to Chicago. It seems likely that the project began in Snohomish. The edition was to be limited to 165 copies, but according to Ransom only 10 copies were completed and distributed. This copy is not numbered, but is complete and colored. Kreisman and Mason discuss the book, but report that the book appeared under the Handcraft Shop imprint. It wasn't until 1921 that Ransom undertook the printing of another book. [See Ransom 3 and Kreisman & Mason, The Arts and Crafts Movement In the Pacific Northwest.].

The pages and location of the pin holes tell us it was printed on a handpress, four up. The presswork is impeccable. The sections are sewn on three vellum tapes. Far too lovely a thing to be left naked, we have made a simple paper wrap to keep it safe.